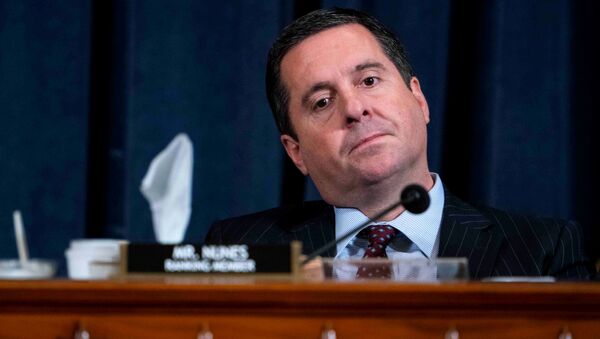 As the impeachment hearings of US President Donald Trump gather momentum surrounding accusations that the president pressured Ukrainian leader Volodymyr Zelensky into investigating allegations of corruption against Joe and Hunter Biden, Trump allies are attempting to fight back.

Representative Devin Nunes from California launched a defamation suit against US news channel CNN on Tuesday over reporting on a story about a Republican congressman's visit to Vienna, Austria.

According to The Washington Times, the Republican, who is currently serving as a member of the House Intelligence Committee, filed a $435 million lawsuit.

Earlier, CNN reported that Nunes met with foreign officials to gather information on the former vice president and Democratic presidential hopeful Joe Biden. The representative is now arguing that the network falsely reported events and that he traveled to Vienna for a meeting with another Ukrainian prosecutor.

A review of the story, released in November by CNN, also claimed that Lev Parnas, an associate of Trump's personal lawyer Rudy Guliani, said that his client would admit under oath that Nunes conducted the trip.

CNN's article reportedly did not verify or disprove the claims made by the attorney.

In court documents posted in the Times, it was said that "Devin Nunes did not communicate with Parnas in December 2018."

“CNN is the mother of fake news. It is the least trusted name. CNN is eroding the fabric of America, proselytizing, sowing distrust and disharmony. It must be held accountable", according to court documents.

Nunes claimed that the CNN report was "demonstrably false" but did not provide proof.

In the lawsuit, Nunes claimed that he did travel between 30 November and 3 December but was in Libya on those dates to "discuss security issues with General Khalifa Haftar" and also in Malta to meet with US and Maltese officials, including Prime Minister Joseph Muscat, and participated in a repatriation ceremony for the remains of an American World War II soldier missing in action".

The news comes as the impeachment inquiry launched by House Democrats against Trump continues, including the release of a report which supposedly reveals "overwhelming" evidence of misconduct and obstruction by the US president.