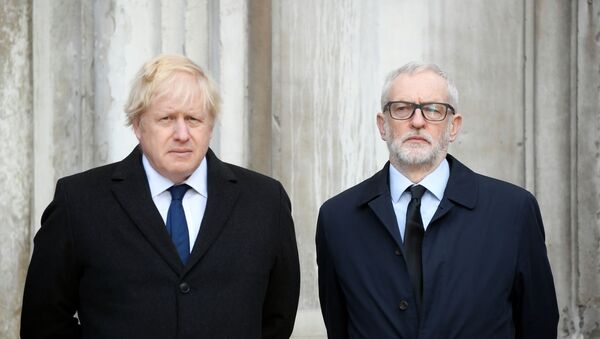 Recent polls suggest that the Tories are on course to win a majority of 68 seats at the general election. Meanwhile, the Labour Party has been accused of alienating voters by shifting its position on Brexit due to a protracted struggle between pro-Brexit and pro-Remain factions.

Journalist Marcus Stead has shared his views on the UK TV debates and the possible outcome of the upcoming election.

Sputnik: What's your reaction been to some of the televised debates you've had in the election this year?

Marcus Stead: Well, the polls are now consistently showing that support for the smaller parties is falling away, and the beneficiaries of that to the Conservative and the Labour Parties. We've got a slightly different situation in Scotland, where the SNP are leading the polls but in England and Wales, we're seeing the Liberal Democrats and the Brexit party dropping a few percentage points with every week that passes. And there's a reason for that. In light of the TV debates, it's dawning on people that come December the 13th: either Boris Johnson or Jeremy Corbyn is going to be the prime minister.

It's not going to be Jo Swinson, it's not going to be Nigel Farage, that's the reality of the choice people are faced with. And for a lot of people, having watched the TV debates, it's a case of who is the least worst option. Many people who vote Conservative will do so reluctantly, they find that Boris Johnson can be a rather evasive character. He has a strange relationship with the truth. They don't particularly trust them, but at the same time they fear, I don't use that word lightly, they fear a Jeremy Corbyn-led government.

Sputnik: Can you tell me why you would use the word "fear" in relation to a Corbyn-led government?

Marcus Stead: There's a lot to be concerned about with Jeremy Corbyn. He did a televised half hour interview with Andrew Neil on TV early last week, in which he was widely regarded to have done very badly. He gave very bad answers when he was quizzed about the party being slow to deal with antisemitism and being far too lenient on members who had clearly engaged in anti-Semitic behaviour. Mr Corbyn was given four opportunities by Mr Neil, to apologise for antisemitism in the party; he did not do so.

And there was an ongoing investigation by the Equalities and Human Rights Commission into antisemitism in the Labour Party. And what concerns me in particular is the way in which a lot of people on the middle class intellectual left seem on a subconscious level, at least, to regard antisemitism as a sort of "lesser racism" and seem to regard a little bit of antisemitism is a price worth paying for preventing a Boris Johnson-led government - and I find that very worrying indeed.

Sputnik: How do you think Boris is doing in the election cycle so far?

Marcus Stead: He turned the Conservative campaign launch into a plethora of undertakings and pledges. He was still coming at you at the speed of light. He was saying there's going to be 20,000 more police officers, 6,000 more GPs, 50,000 more nurses, with nurse bursaries as well.

A concentration on technical education, research spending to be doubled, a billion pounds more for social care, half a billion to be spent on potholes, taxes on small businesses to be cut to, and a the living rate wage raised with no increase in income tax. And the IFS sounded unconvinced by this, but I think they may have underestimated the post-Brexit bounces; many of the decisions that have been delayed by the uncertainty of Brexit would then go ahead.

Boris Johnson is not helping himself in some ways, his team have repeatedly dodged attempts to be grilled by Andrew Neil and Mr Johnson, his big weakness, is that he's known for his lack of attention to detail, he's not big on facts and statistics and so forth. And I think that would catch up with him. So, it's going to be an interesting 10 days or so between now and the election.

Sputnik: Do you think the British public are being bombarded with maybe too much political media, especially in primetime TV going into this election? Do you think it really does anything to help the electorate make up their mind?

Marcus Stead: I think there’s too many of these so-called "debates" where we're seeing not so much debates, but seven people on the stage giving a series of statements and with the best will in the world, the likes of Jo Swinson, Adam Price, and Nicola Sturgeon are not going to be prime minister after the election. Indeed, Nicola Sturgeon and Mr Price are not even standing as candidates. So I don't think these so-called debates really help people make up their minds, the format is clunky and clumsy.

Boris Johnson to Minimise Appearing With Donald Trump Ahead of Election – Report
I think we learned far more from the long form political interview, where we get the likes of Andrew Neil, who's a particularly strong interviewer, who's actually gone through the manifesto, sitting down one on one, with no audience, where he can really interrogate people. People like Jeremy Paxman, Sir Robin Day, and Brian Walden used to do historically. But I think the events of last Friday in London have fundamentally changed what's left of the election campaign.

Last Friday, we saw both the best and the worst of Britain. We saw the evil of Usman Khan killing two innocent people on London Bridge, but we also saw extraordinary acts of bravery and heroism from the emergency services and ordinary members of the public who were are at the scene. But inevitably, in an election campaign, it wasn't long before that blame game began. And that came across in last Friday and indeed on last Sunday's TV debates.