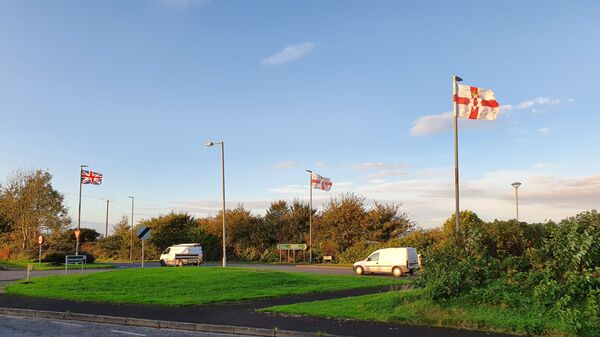 Chris Summers
All materialsWrite to the author
Every once in a while unionists and loyalist in Northern Ireland get stirred up by what they fear is a pending betrayal by London. It happened in 1912, and again in 1985 and now there are signs of it once again. Why?

Loyalists in Northern Ireland are furious about Boris Johnson's Brexit deal, which puts a border in the Irish Sea and increases the chances of a united Ireland one day.

The Democratic Unionist Party (DUP) - who propped up Theresa May’s government for two years - were widely perceived to have been “played” by Boris Johnson, who was said to have “shafted” them when he reached a deal with the European Union in October.

​Kieran Kennedy, who runs sportswear firm O’Neills, who employ 900 people on the island of Ireland - 720 of them at their factory in Strabane in Northern Ireland, said: “The DUP has backed the wrong horse. The DUP has pushed us as a nation nearer to become a united Ireland than ever before.”

Last week the DUP launched their election manifesto, in which they laid out their opposition to Johnson’s deal.

Deputy Leader Nigel Dodds said: "We will work to try to get a sensible Brexit deal. But it cannot erect new barriers, (there can be) no borders in the Irish Sea.
We need our people to come together, not create more division."

​Dodds is among those DUP MPs who faces a stiff battle to hold onto his seat - his challenger in North Belfast is Sinn Fein’s John Finucane, whose father Pat was murdered by loyalist paramilitaries in 1989, possibly following collusion from British security forces.

Boris Johnson’s deal would create a customs union on the island of Ireland, which would mean the North would effectively remain within the EU and separate from the rest of the UK.

Professor of politics at Liverpool University, Jon Tonge, told the BBC: “A Boris Johnson minority administration may keep the DUP in place. If the Conservatives win big then it's really over for the DUP. Why would you have the DUP onside if you don't need them?"

Prof. Tonge said: "The party has often been prepared to walk away, and has said no a lot more times in its history than it's said yes."

​In 1912, when it became clear the British were considering grants “Home Rule” to Ireland, unionists in the North created the Ulster Volunteer Force, led by Edward Carson, and protested loudly against Irish home rule.

Carson’s men made so much noise the British were forced to withhold the six northern counties - Antrim, Armagh, Down, Fermanagh, Londonderry and Tyrone - when they granted independence to the Irish Republic in 1921.

Irish republicans’ demand for a “united Ireland” fuelled The Troubles and between 1969 and 1998 it claimed 3,500 lives.

In 1985 the Anglo-Irish Agreement was drafted by Margaret Thatcher and her Irish opposite number but it provoked a furious backlash among unionists and had to be quietly shelved.

The violence was ended by the Good Friday Agreement, which was ironically opposed by the DUP and its firebrand leader Ian Paisley.

Paisley died in 2014 but his son remains a DUP MP and the party is hoping to hold off a challenge from its old rival, the Ulster Unionist Party, under its new leader Steve Aiken.

On Sunday, 1 December, Aiken said he hoped Johnson was not returned to 10 Downing Street.

Aiken said: “Boris Johnson’s activities are not just affecting Northern Ireland, they are affecting the entirety of the United Kingdom, and he is probably going to be the first prime minister if he gets re-elected – which I hope he doesn’t – he is going to be the first prime minister that comes back in a situation where the future of the union itself is under threat.”

The UUP will be hoping to gain ground on the DUP, whose leader Arlene Foster has been manipulated by Boris Johnson and has failed to reach agreement with Sinn Fein over the return of power-sharing at Stormont.

But its toughest challenge will probably come in North Down, where the respected independent Lady Sylvia Hermon has stood down and now the UUP’s Alan Chambers is facing a head-on fight with the DUP’s Alex Easton.