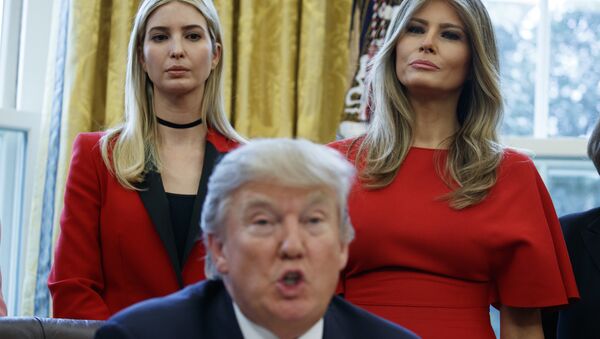 © AP Photo / Evan Vucci
Subscribe
Although Melania Trump has become an inspiration for speculations, jokes, and memes, she is said to be one of the most press-wary first ladies. The new book aspires to offer a new look at her behind-the-scenes life, including her rumoured alienation from the “first daughter”, or sleeping on a separate floor from her husband.

The book titled "Free, Melania: The Unauthorized Biography" by Kate Bennett, which promises to add some new details to the image of US First Lady Melania Trump – who has been branded an “enigma” due to her rare public comments, has left netizens split. The biography, which is set to hit the shelves on Tuesday, plays with a popular meme that claims she is “trapped” in the White House in its title, but insists that she has a flare of independence and does not need any help.

According to CNN’s takeaways from the new creation, “Free, Melania” offers revelations about popular anecdotes and debated events centred on the FLOTUS. The book says that she has her own quarters in the White House and sleeps in a separate bedroom, something which has been speculated about before, as she enjoys her private space.

The book also dismantles rumours about her lack of power, saying she is influential with her presidential husband. It cites a source familiar with the situation who claims that she can both shake up the White House staff and weigh in on Donald Trump’s decisions, discussing matters with her husband.

Only Melania Can Say No to Ivanka Trump, 'Kushner Inc.' Author Claims
The book also touches upon her relations with her stepdaughter Ivanka Trump, who shares the spotlight with the first lady. According to friends and former White House sources, the two women are not as “chummy” as they were be before Donald Trump was elected. Some even reportedly say that Ivanka Trump’s unusual involvement has “caused drama”, as Mrs Trump thinks the first daughter is invading her turf.

Despite the seemingly sensitive nature of some of the revelations, some netizens do not appear to be impressed. According to commenters online, the author is too soft on Melania Trump.

Kate Bennett is soft on Melania. She was on Brooke Baldwin's show last week and seemed quite protective of her. I will not read the book .

The article is garbage so the book must be as well. Melania is as despicable as the rest of that family and this is nothing but gossip. This is not a serious journalistic endeavor.

Wow-- even the condensed-to-a-few-hundred-words highlights of this puff-"book" on #Melania manage to reveal absolutely nothing whatsoever.

This may or may not be "unauthorized." But it is everything the White House could wish. https://t.co/hRrnuYCClm

The follow up book should be “Flee, Melania: a story of her life on the run” for when her family goes down for the crimes they have committed.

Let’s just say I won’t be reading Free Melania. If she came her illegally and used Trumps ( mutual I’m sure)money to buy her citizenship nothing the book can say will endear her.

​Others, on the contrary, are eager to learn more about the behind-the-scenes life in the White House.

Separate bedrooms and a private gym with a Pilates machine – in her new book, @KateBennett_DC explains what things are like in the East Wing https://t.co/8fglcx7e1K