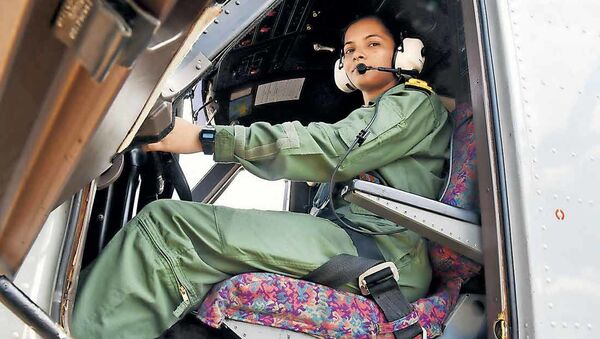 New Delhi (Sputnik): Until now, women in the Indian Navy have only played the role of air traffic control officers and as observers in aircraft. This is the first time that the naval force has inducted a female pilot, contrary to the 1992 model which allowed the participation of women only in medical services.

Creating history, Sub-Lieutenant Shivangi became the first woman pilot of the Indian Navy on Monday to have joined naval operation, two days ahead of the Navy Day on 4 December.

Flying a Dornier for another six months of mission-based flying, she will aim for the P8I long-range maritime aircraft.

Shivangi, who grew up in India’s eastern state of Bihar’s Muzzaffarpur district, completed her basic training in 2018 at the Indian Naval Academy. Later, she trained with the Indian naval air squadron, the INAS 550, in India’s Kerala state.

Sharing what motivated her to join the Indian Navy, she once told media: "When I was 10 years old, I saw a minister who had come to meet people and the man who was flying his helicopter. It was very inspiring for me. In my mind I thought that maybe someday I'll also fly something like this".

Currently, the Indian Navy has approximately 600 women serving as medical and supporting staff.

The Indian Armed Forces had been sceptical towards introducing women in a fighting capacity, but promises to reverse the trend have been made by the administration in the last few years. In 2016, the Indian Air Force allowed women to fly fighter jets on an experimental basis.