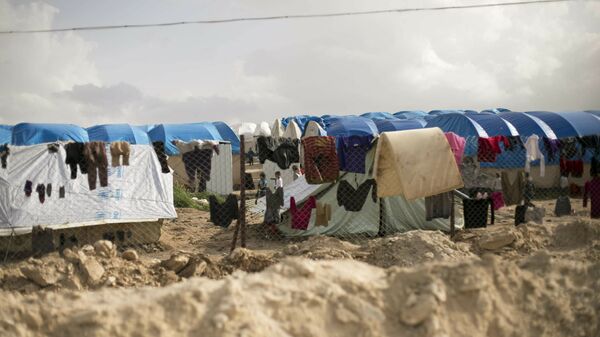 The Russian Defence Ministry dismissed a report by The New York Times (NYT) about Russia's Aerospace Forces' alleged bombing of a Syrian refugee camp in August.

"Like a month and a half ago, the ridiculous accusations by the authors of the fake are based on a video of unknown origin with swindlers from the White Helmets against the backdrop of buildings of the 'refugee camp'; pictures of the blue sky in which a Russian plane was supposed to be and fragments of Russian phrases, allegedly belonging to the Russian Aerospace Forces pilots", ministry spokesman Maj. Gen. Igor Konashenkov said.

Konashenkov added that to the disappointment of those who ordered the fake, the ministry is forced to recall again that the transfer of the coordinates of targets to the pilots of Russian bombers or reports on the fulfilment of their tasks are not carried out by voice on the air openly.

The comment comes as the NYT ran an article claiming that a Russian pilot conducted an airstrike on a refugee Syrian camp.

Since 2017, Russia has been one of the three guarantors of the ceasefire in Syria, which has been engulfed in a civil war for years. The Russian armed forces have been providing military assistance to Damascus throughout the conflict, while also carrying out regular humanitarian operations across the country.

Russia is now assisting Syria in the post-war reconstruction and the return of refugees.

The Russian military police are currently engaged in patrolling Syria's provinces of Aleppo and Raqqa along the border with Turkey as part of the Russia-Turkey deal over the buffer zone in northern Syria.

Following talks between Russian President Vladimir Putin and Turkish President Recep Tayyip Erdogan, a Russian-Turkish memorandum was signed on 22 October in Russia's Sochi, which stipulates conditions for the peaceful withdrawal of Kurdish militants in Syria to a distance of 30 kilometres (18.6 miles) from the border with Turkey.

The 10-point document envisions a variety of patrol missions carried out by the Russian military contingent in Syria, Syrian border guards, and Turkish troops in order to ensure the implementation of the deal.