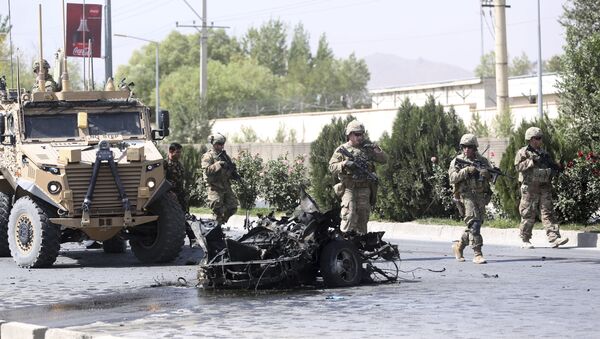 US President Donald Trump managed to pull off a surprise visit to Afghanistan on Thursday, where he served Thanksgiving dinner to US troops stationed there, held talks with Afghan President Ashraf Ghani, and declared that the Taliban talks are back on the table-all in less than 19 hours.

“I think he likes to project this image of being a strong American president standing for America's interests and those safeguarding it”, says Umer Karim, a visiting fellow at the Royal United Services Institute, a London-based think tank. “So him being in Afghanistan with US troops on Thanksgiving, a very specific American festival, fits that context”.

Release of Hostages in Afghanistan Could Lead to 'Good Things', Ceasefire - Trump
Dr Hasan Askari Rizvi, a prominent independent political and defence analyst, based in Lahore, Pakistan says the visit was meant to project “a positive and friendly image within the United States at a time when he faces difficulties in the domestic context due to the initial investigations regarding his possible impeachment, and also to defuse political polarisation”.

While Arif Rafiq, a non-resident fellow at the Middle East Institute and the president of Vizier Consulting, a New York-based political risk advisory company, believes that the US president chose to visit Afghanistan because he hadn’t done so after almost three years in office.

“Afghanistan is America’s longest ongoing war and it is at a crossroads as Trump is deciding whether he would like to resume formal talks with the Taliban”, he said.

After his quick trip, Trump declared he had reopened peace negotiations with the Taliban. This comes less than three months after talks were abruptly cancelled following the militant group claiming responsibility for an attack in Kabul that killed an American soldier and 11 others.

But ending the 18-year war in Afghanistan has been a focus for President Trump since he took office.

POTUS also reaffirmed his plans to reduce the American military presence to 8,600 troops, down from the around 13,000 that are currently in Afghanistan.

“We’re going to stay until such time as we have a deal, or we have total victory, and they want to make a deal very badly”, Trump said referring to the Taliban.

If the US wants to reduce its troops in Afghanistan, it will have to enter into some kind of agreement with the Afghan Taliban, Dr Rizvi noted.

“The Taliban appear to be in favour of a dialogue on favourable terms”, the expert added.

When negotiations with the Taliban were cancelled in September, Zalmay Khalilzad, US Special Representative for Afghanistan Reconciliation claimed that the peace agreement was almost ready, but this sudden resumption of talks only shows the White House’s unpredictability, Dr Rizvi said. 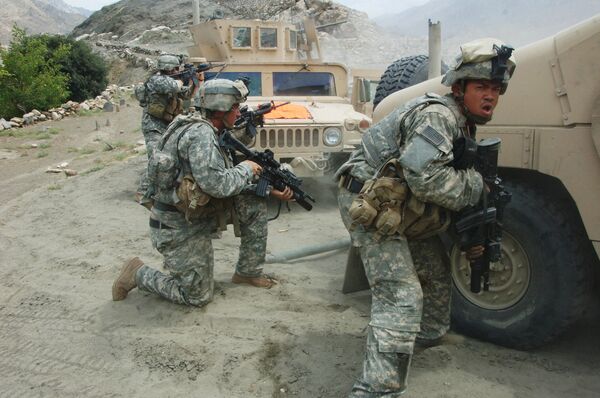 “The discontinuation of the talks in the past and now a sudden decision to resume talks without giving any reasons shows instability in his disposition. This will cast a shadow of uncertainty on the revived talks between the US and the Afghan Taliban”.

But Fakouri Beheshti, deputy head of the Afghan Parliament’s Foreign Relations Commission, believes the Taliban’s talks with the United States will not bear fruit, no matter how much Donald Trump wants it:

“The negotiations that we’ve observed in the past year have not produced any positive results for ensuring peace and security in the country. The situation has only worsened”.

The Taliban has confirmed that Washington resumed informal talks with the Afghan armed group, the news outlet Al Jazeera reported.

Umer Karim, from the Royal United Services Institute, believes that the talks never completely broke off.

“...Indirect channels of communication mainly through Pakistan and the Taliban's Doha office always remained functional and with the latest release of American hostages, it was apparent that the talks would soon formally be resumed. The main obstacle will be bringing the Afghan government into it and making them agree upon a peace deal with the Taliban that paves the way for an interim setup”, he stressed.

“He definitely will try to reduce this number even further and we may see similar announcements about troop withdrawals in future alongside talks with the Taliban picking up pace. For him, this is a major point he will sell to the electorate that: I have brought back American troops and ended another war which President Obama failed at. So, yes the plan is very much viable depending on how the political peace process goes and it completely goes with Trump's election campaign”, Karim explained.

Dr Rizvi, shares this view and says the US troop withdrawal is expected to begin in January or February 2020 before the start of the primaries in the American presidential election.

“Its completion may take a few months but Trump would like the plan for withdrawal to be rolled out by the time the presidential primaries start in the US”, he said.

At Least 9 Civilians Killed in US-Led Coalition Air Strike in Afghanistan - Reports
But what happens after the reduction of American troops is difficult to predict according to experts because it will not be easy for the Afghan government to reach a political settlement with the Taliban.

The Afghan government has refused to enter negotiations without the Taliban agreeing to a ceasefire, but the Taliban wants talks first.

And while Trump’s statements suggest that the militant group’s position has shifted, it’s still unclear if the Taliban will agree to a ceasefire.

“The peace talks can quickly resume if Trump merely insists on a ceasefire between the United States and the Taliban. However, the Taliban are unlikely to agree to a ceasefire with the Afghan government, so if Trump makes that a prerequisite for a preliminary agreement with the militant group, the odds of peace talks resuming or reaching success are low”, Mr Rafiq shared.

Another issue complicating the peace talks is the war-torn country’s electoral commission being weeks behind schedule in announcing the results of 28 September election.

“Vote counting has come to a halt. Ghani’s opponents would like 300,000 of the roughly 1.8 million votes thrown out now, alleging that they are fake ballots in the Afghan president’s favour. One cannot expect the Taliban to begin talks with the Afghan government if there is effectively no government in Kabul”, he stressed.

And this could influence Trump’s decisions about the country.

“If the election crisis persists and turns violent, Trump could resist playing the role of a policeman in the Afghan civil war and may end up pulling the plug on the US war effort there”, Rafiq said.

According to Beheshti, Trump’s visit to Afghanistan will not affect the outcome of the presidential election:

“The people of Afghanistan expect the Election Commission will announce the election results in accordance with the provisions of the Constitution and the Election Law. Unfortunately, so far the Commission has not been able to announce the results within the deadlines. It seems that Trump’s visit will not solve the stalemate with the election results”.

Dr Hasan Askari Rizvi, pointed out that peace in Afghanistan would also need the states in the region, especially Pakistan, Iran, Russia, and China, to use their diplomatic influence to convince the Afghan Taliban and the Kabul government to strike a deal.

“The US alone is not expected to succeed in bringing peace to Afghanistan”, Rizvi concluded.