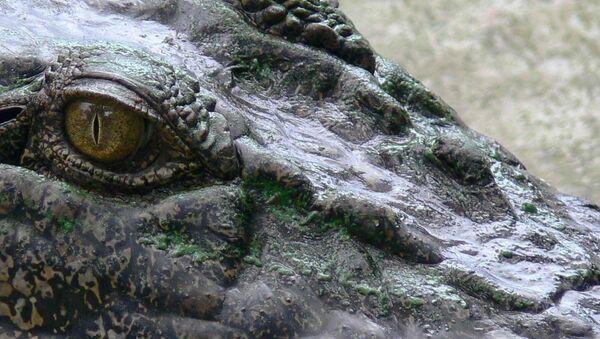 New Delhi (Sputnik): A mammoth-sized crocodile caused panic amongst villagers after it ventured into the agricultural fields of a village in Western India’s Gujarat state.

A 12-foot-long crocodile was rescued from a remote village on the outskirts of Vadodara, around 90 miles from the state capital Gandhinagar. The reptile was rescued by a team of wildlife volunteers, who later handed it over to the forest department of the state.

The four-hour-long rescue operation was captured on camera, in which a group of people can be seen struggling to control the crocodile.

The video shows the massive crocodile twisting and turning to free itself from the strings tied around its mouth by the rescuers.

#WATCH Gujarat: A 12-feet-long crocodile which had ventured out into fields in Raval village of Vadodara, yesterday, was rescued and handed over to forest department. pic.twitter.com/TOiVuqjXFv

Locals suspect that the crocodile might have hauled out of the nearby Vishwamitri River, which is inhabited by approximately 500 crocodiles.

Earlier this week, a similar mammoth-sized crocodile was rescued from the same city.

In some villages in India's western state of Gujarat, locals live side by side with crocodiles, which are considered extremely dangerous. Amid these frequent incidents, residents of Vadodara in Gujarat have a new emerging fear of these reptiles.