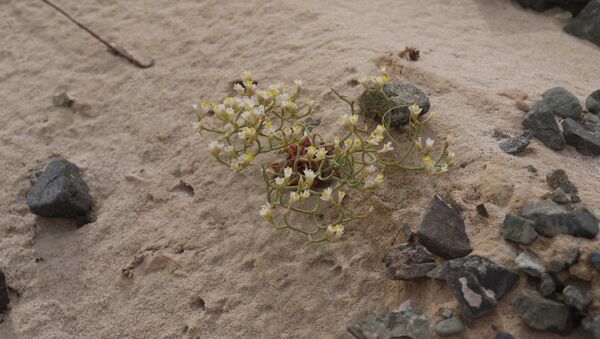 © Flickr / WhatsAllThisThen
Subscribe
The fish was first described by Russian scientist Alexander Karpinsky in 1899 who named it Helicoprion bessonowi after Alexander Bessonov who discovered the fossils two years earlier. For many years scientists argued how the fish used its cryptic spiral teeth.

A team of Russian scientists have uncovered fossils of a giant fish with buzzsaw teeth that is thought to be the ancestor of modern-day chimaeras also kown as ghost sharks or ratfish. Researchers made the discovery this summer in a coal mine in the city of Saratov.

According to Alexander Ivanov, who led the research, the finding belongs to the members of Helicoprionidae family, commonly known as Helicoprion and dates to 300 million years ago.

Scientists think these creatures, which look like modern-day sharks, reached impressive sizes with the biggest one estimated to be seven and a half metres long. But one feature of the fish left scientists scratching their heads – its buzzsaw teeth with an average size estimated to be 25 centimetres in diameter. First they thought that this whorl of teeth couldn’t fit in the fish’s mouth and was likely to be found in other places. Alexander Karpinsky who first described Helicoprion portrayed it with a spiral of teeth on its upper jaw, while other researchers placed them on the lower jaw, on its back and even on its tail. Researchers also argued how the creature used the buzzsaw teeth to attack and chew its prey, with some scientists suggesting that the jaw was flexible and Helicoprion used it as a whip.

In 2013, using state of art scanners, Professor Leif Tapanila, of Idaho State University and his colleagues created a 3D reconstruction of Helicoprion.

Meet Helicoprion nevadensis! This cartilaginous fish (more closely related to ratfish than sharks) possessed a fused whorl of teeth that may have been used to cut through the shells of molluscan prey. Their range included northern NV.#SharkWeek 📷Scott Heath (Flickr CC BY-NC 2.0) pic.twitter.com/3tPO2Trbzn

​Scientists came to the conclusion that the spiral of teeth grew inside the lower jaw and as the jaw closed the whorl rotated the teeth backwards similar to what a buzzsaw does. Taking into account the fact that the teeth were well preserved, scientists assumed that Helicoprion ate soft-bodied creatures like shrimp or pre-historic squid.

Scientists also concluded that the fish is more closely related to chimaeras like ratfish than sharks, although both species have cartilage instead of bones, which is why their fossils do not preserve well.

In Krasnoufimsk, where the Helicoprion was first discovered it became an unofficial paleontological symbol, which earned it a place on a commemorative coin issued in 2014.