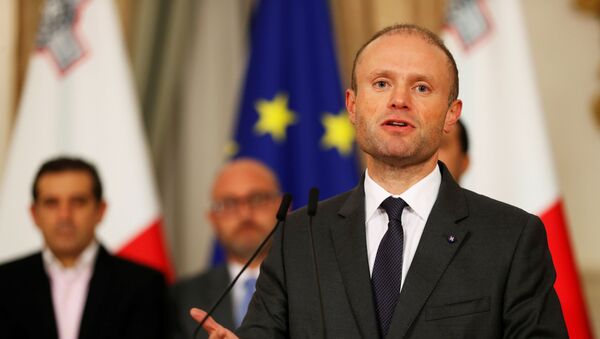 © REUTERS / Yara Nardi
Subscribe
Earlier on Friday, the premier said that he would not leave his post until the end of the probe into Daphne Caruana Galizia's murder, who had investigated various cases of corruption in Malta.

Maltese Prime Minister Joseph Muscat announced his resignation in January on state television on Sunday, saying that he will ask his Labour Party to initiate the process of electing a new leader.

“We are starting the process for a new prime minister who will continue carrying out the work for this legislature", Muscat said in the televised address, as reported by Times of Malta newspaper.

According to the premier, the election is expected to take place on 12 January.

Caruana Galizia's case has cast a shadow on Muscat, as many of his associates have been implicated in the journalist's murder.

According to media reports, Caruana Galizia, an investigative journalist, documented Yorgen Fenech's 17 Black's payments to Maltese politicians eight months before her death. She was killed by a car bomb outside her Bidnija home in October 2017.

Currently, Maltese tycoon Fenech is being charged in connection with her murder. He earlier asked the Maltese government for pardon in exchange for information on the role played by people close to Muscat in the assassination, the Malta Times newspaper reported.

Fenech was arrested on 20 November while allegedly attempting to escape the country on his yacht.

Caruana Galizia investigated various cases of corruption in Malta based on the so-called Panama Papers, which revealed illegal finance activities of government officials from around the world.