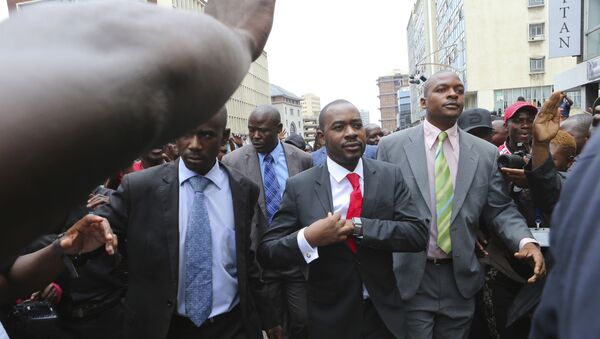 On Sunday, Chamisa visited Marondera to take part in a tree-planting ceremony as part of implementing the environmental agenda of his party. During the visit, he was going to attend a local school, which, however, turned out to be cordoned by about 200 heavily armed personnel. Chamisa proceeded to other events, scheduled under the visit, but a new group of armed officers soon arrived at the site.

“These state agents did not talk to anyone even when there were attempts to understand their aggressive approach and demeanour. The shooting of live ammunition, rubber bullets and tear gas began almost as immediately as the vehicles came to a halt,” the statement said.

The spokesperson pointed out that Chamisa, who was not injured in the incident, took part in an environmental event, not a political gathering, or demonstration.

“The world must now be awake to the dangers of situations of unhinged, insecure, almost barbaric and savage relationship that these state apparatuses want to have with the country. A government whose single purpose and excitement is to harm citizens and to cause the most extreme violence, is a danger to itself, its neighbours and the national security interests of Zimbabwe and continues to bring shame and unnecessary disrepute to Africa and her heroic people,” the statement added.

Chamisa, in turn, said that he was "shocked by the behaviour of the police."

Gunshots and canisters..So shocked by the behavior of the police, armed with guns and weapons, as they besieged the venue and started taking aim at us as we were planting trees at Dombotombo clinic in Marondera today.Had to take cover.I can’t get this excessive use of violence..

The situation in Zimbabwe remains tense since July 2018, when Chamisa refused to concede the defeat to Emmerson Mnangagwa in the presidential race, claiming that the result was rigged. The country has since been repeatedly shaken by violent protests, with the opposition accusing the government of corruption, rising economic woes and clampdown on dissent.

000000
Popular comments
The world is blocking your country and people from development by imposition of an embargo and you come crying right to them? they are the ones responsinble for the bearth child death´s that is spreading around the country!!!