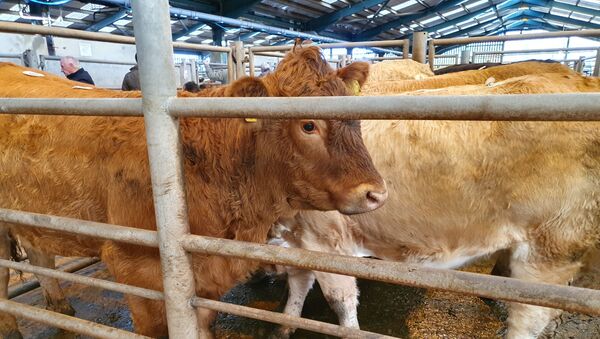 The deputy president of the UK’s National Farmers Union, Guy Smith, is in hot water after videos from hidden cameras, showing workers attacking animals at the dairy division of his company, were leaked. He has shrugged off responsibility and insists that the materials were obtained illegally.

Workers from an Essex farm, owned by the company of the National Farmers Union’s deputy president, have been caught on camera punching, kicking, hitting with sticks, and sexually abusing dairy cows, The Independent reports, citing unnamed investigators. According to the outlet, they were alerted after a member of the public had discovered the rotting body of a calf.

According to the investigators, they installed hidden cameras at the premises at St Osyth, near Clacton, photographed the decomposing remains of calves, and visited the farm several times, revealing a string of disturbing cases.

The materials have been sent to the Surge animal protection group, campaigning against the dairy industry, which eventually passed the findings on to the Animal and Plant Health Authority and The Royal Society for the Prevention of Cruelty to Animals (RSPCA).

“We were concerned to see this footage and we are looking into it further”, the latter told the outlet.

Although there is a signed affidavit saying that the researcher entered the farm “entirely lawfully” and that “nothing was damaged, forced, broken or interfered with”, according to The Independent, both the NFA’s Guy Smith and the company linked to him insist that the footage was obtained illegally.

“I am aware there are allegations, relating to the treatment of dairy cows, made against employees of a company of which I am one of six directors. The allegations stem from illegally obtained video footage”, he said.

He also distanced himself from the dairy division of his firm, marred in the scandal, saying that he is not responsible for it and that he “derives no financial benefit from it”.

“In particular, I have no responsibility for the recruitment or training of staff and nor do I have any input into the manner in which that side of the business is run”, Smith, whom Companies House documents identifies as a director and shareholder of Smith Farms (Clacton) Ltd with the farm in question, said.

The dairy branch of the company has told the outlet that they “have taken immediate action in relation to the incidents shown (including disciplinary action) and have implemented a comprehensive retraining programme”. However, they also lambasted the investigators’ activities as a “breach of privacy”.

“Trespassers entered our farm unlawfully and secretly filmed many hours of footage over a period of 18 months. We regard this as a gross breach of privacy – of family members, children and staff members – and absolutely condemn it”, its spokesperson said.

“As the secretary of state has said, we have the third-highest animal welfare standards in the world. British farmers are proud of their high standards and don’t want to see them watered down”, he told The Yorkshire Post in 2017, discussing Brexit.