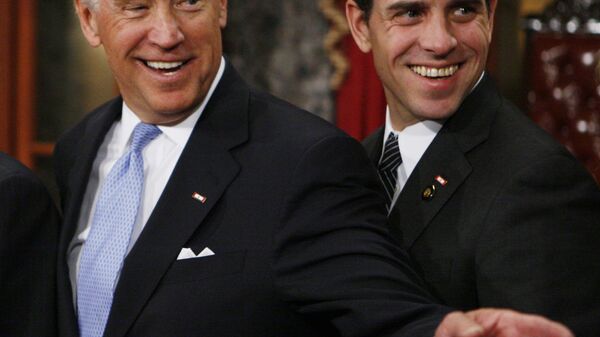 Aleksandra Serebriakova
Moscow-based Sputnik correspondent specializing in foreign affairs.
All materialsWrite to the author
The son of former US Vice President Joe Biden, Hunter, has come under renewed scrutiny this month following reports that he has been identified via DNA testing to be the father of a 15-month-old child of a Washington, DC stripper, Lunden Alexis Roberts, who filed a suit in May seeking to establish Biden's paternity.

Hunter Biden, a former executive of a Ukrainian energy firm and the son of 2020 presidential hopeful Joe Biden, filed a legal request to seal his financial records in the Arkansas Circuit Court of Independence on 27 November amid an ongoing paternity petition and child support case, according to court documents obtained by the Daily Mail.

The filing for a protective order for Hunter Biden’s financial records states that such information could be “used in an inappropriate and malicious manner” if disclosed.

“The likelihood that [Hunter Biden's] private records will be used in an inappropriate or malicious manner for reasons that have absolutely nothing to do with these proceedings is exceedingly high and should not be tolerated by the court”, the document states.

If the request is granted, the embargo will also prevent the release of any information related to Hunter Biden’s business dealings, expenses, and tax payments. The media outlet also cited a statement by Biden's attorney Dustin McDaniel that potential disclosures of his financial records could cause Hunter Biden “undue prejudice, annoyance, embarrassment, and/or oppression”.

In addition to the protective order, Biden also requested a delay in the upcoming December hearing, arguing that he was unable to complete an affidavit of his financial records required by the court because he lacked “complete information” to do so.

Biden’s Paternity Revealed, But Is He Going to Pay?

In November, Hunter Biden was identified by DNA testing to be the father of a 15-month-old child with Lunden Alexis Roberts, 28, who was reportedly working as a stripper at the Mpire Gentlemen's Club in Washington, DC when she engaged in relationship with him. Roberts filed a suit in May 2019 seeking to establish Biden's paternity of her child, who was born in August 2018, while Hunter was still in a relationship with his brother Beau’s widow Hallie Biden.

Hunter repeatedly denied being the father of Roberts’ child, but agreed to DNA testing in October, which confirmed his paternity. The former stripper is now demanding that Biden pay her $11,000 in legal fees in addition to child support, while also seeking Secret Service protection for her child, citing the “political status” of its grandfather, Joe Biden.

The court documents revealed that Hunter Biden is not contesting the child’s paternity anymore, but rather seeking to establish an appropriate amount of “temporary”  financial support that could be allocated to the child. Joe Biden’s son also insists in his court statement, obtained by the newspaper, that he currently has “significant debts” following his divorce, which was finalised in April 2017.

“In an effort to demonstrate to this court my good faith, I attest that I am unemployed and have had no monthly income since May 2019”, Biden's statement reads.

Hunter Biden Opens Up on "Honeymoon Phase", Matching Tatoos With New Wife
Hunter, the son of current Democratic presidential candidate Joe Biden, has been surrounded by public controversy this year following an impeachment inquiry that was launched against US President Donald Trump alleging that he had pressured his Ukrainian counterpart Volodymyr Zelensky to start a probe into the Biden family's activity in Ukraine. Hunter Biden was serving on the board of directors of Ukraine's Burisma Holdings Group in 2014, a post he left only recently, while his father Joe Biden was appointed to lead the Obama administration’s policy towards Ukraine. In 2016, then-VP Joe Biden reportedly used his influence to demand that Ukraine’s Prosecutor General Viktor Shokin be dismissed following a probe into Burisma’s alleged illegal activities. Hunter Biden also recently stepped down from the board of a Chinese private equity firm following public scrutiny.
000000
Popular comments
Criminals never want you to know how much money they really have & yet we all have to do are taxes, no if ands or buts.

Dungeon Ambassador from Terra
30 November 2019, 20:16 GMT2
000000
Biden son an Epstein protégé? Of course he will be ducking and diving not pay child support. Daddy Biden will be proud of his son. Like father like son they say, or the chips do not fall far from the tree.