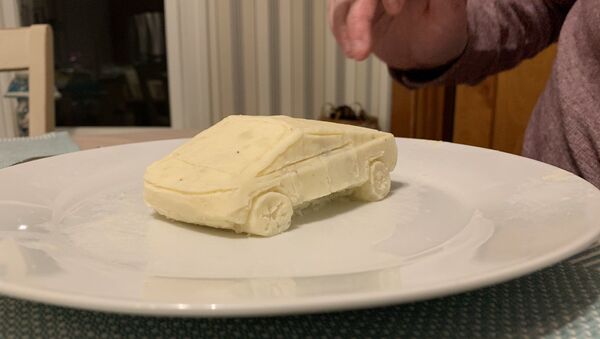 Maybe Thanksgiving dinner is the best time to say "thank you!" to everyone you want to thank - family, friends or, for example, Elon Musk for Tesla's long-awaited Cybertruck, which was presented at an event in Los Angeles last week. One guy in particular, seen in the video, came up with a highly distinctive way of thanking Tesla's founder.

Dan Milano, a producer for NowThis News, shared a video on his Twitter page on Thanksgiving day, showing his brother Greg sculpting a Tesla Cybertruck out of mashed potatoes. It is interesting to note that Greg recreated a tiny version of the Cybertruck pickup truck, which is right on the money as it resembles the original Cybertruck's unique angular style design.

My brother has been working on a mashed potato cybertruck for over an hour pic.twitter.com/Bze4kOKiHy

​But the design is not the only similarity, the brothers went further and made a ramp out the back end and even created two holes in windows of the potato truck - a reference to the moment when windows of the Cybertruck smashed during a demonstration of the electric truck's armoured glass.

"The windows have been mashed, by popular request," Dan said.

The windows have been mashed, by popular request. pic.twitter.com/iJxVxhVIxU

Unfortunately, the potato truck wasn't everlasting, its fate was predetermined - the truck was doused in a sauce. After all, it was a truck and its duty was to carry things, even if it is the sauce.

​It wasn't the first time that Dan's brother made something out of mashed potatoes. Dan added that his brother has more potato masterpieces in his Instagram account.