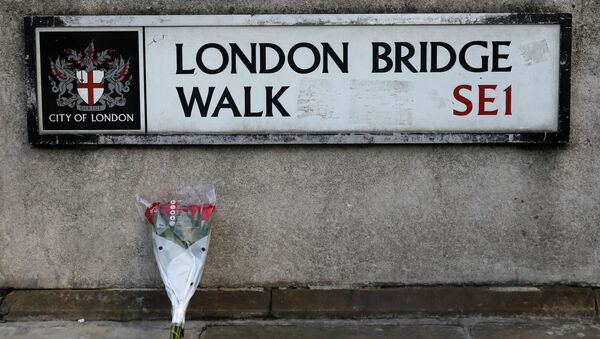 Subscribe
Met Police said on 29 November that a man had stabbed several people near and on London Bridge in the capital of the United Kingdom.

Assistant Commissioner Neil Basu confirmed that the suspect was shot dead on the spot and that the incident has been classified as a terrorist attack. The police believe that a hoax explosive device was attached to the suspect's body, he added. Basu noted that increased police patrols would be deployed on London's streets in the wake of the incident, while cordons would temporarily remain around the site.

Two people died as a result of their injuries and three more are in serious condition in hospital, according to police. Law enforcement has identified the man who perpetrated the attack as 28-year old Usman Khan, convicted in 2012 for terrorism offences and released in December 2018.

According to preliminary evidence, the man attended a meeting on Friday afternoon in London's Fishmonger's Hall. The attack began inside before he left the building and proceeded onto London Bridge.

According to the UK's top counter-terrorism police officer, law enforcement personnel have carried out two searches in Stoke-on-Tent in Staffordshire. Police have reportedly found no evidence that anyone else was involved in the attack.

London Bridge will stay closed for a while to allow investigators and forensic experts to do their job after the recent fatal stabbing, Mayor Sadiq Khan said on Saturday.

Sadiq Khan said during a visit to the scene that it would remain closed for "some time", according to multiple media reports.

London’s transport service said earlier in the day that the bridge and its approaches were closed in both directions following the incident, in which a man and a woman were killed. Three others were wounded, one of them critically.

UK flags to be flown at half mast for London Bridge attack victims https://t.co/cgQpoebuF9

"Following a terror attack in the heart of London, my thoughts are with the British people, the victims, and their close ones. I strongly reiterate our determination to fight together against those who want to reach us with terror and violence", French President Emmanuel Macron wrote on Twitter.