How Did Black Friday Turn Really ‘Black’ Around the World This Year? 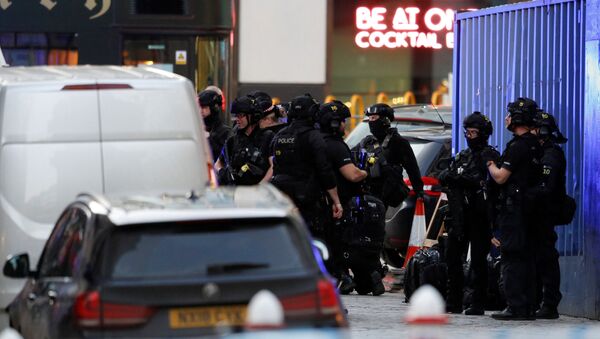 Aleksandra Serebriakova
Moscow-based Sputnik correspondent specializing in foreign affairs.
All materialsWrite to the author
Black Friday is usually associated with increased sales and the start of the Christmas shopping season around the world. While injuries associated with crowds are usually reported each year, this time a terror attack in London and numerous other incidents around the world seemed to turn this celebration of consumerism into a really gloomy event.

Several shooting and stabbing incidents at shopping malls, train stations, and on the streets were reported in major world cities on 29 November in addition to the massive queues and traffic jams traditionally associated with Black Friday sales. Increased promotions and sale offers tend to follow the celebration of Thanksgiving, which is marked on the fourth Thursday of November in the US, signalling the launch of the Christmas shopping season worldwide. This year, the term may have earned a new meaning, following a number of deaths and injuries that occurred around the world as a result of multiple deadly attacks.

On Friday afternoon, a man stabbed several people with a knife on London Bridge in the British capital. The attacker, who was shot dead by the police while wearing a hoax explosive vest, was later identified as 28-year-old Usman Khan, who had been released from prison in December 2018, where he spent eight years in connection to terrorism-related charges. Khan’s earlier conviction is believed to be linked to plots to bomb the London Stock Exchange, Big Ben, and Westminster Abbey in 2010.

Several people were injured during the attack. Two of the victims, a male and a female, later died in hospital, while three others at the time of publication remain under observation by doctors. The incident has since been deemed a terrorist attack and is currently being investigated by Scotland Yard.

Stabbing in The Hague

Three youths were wounded on a shopping street in The Hague in the Netherlands on 29 November, according to police reports. Images on social media showed dozens of people running away from the main market square area Grote Marktstraat, where the incident took place.

The suspect has so far not been captured, with police reportedly looking for a North African man. The attack has not been described as “terrorist”-related by national media, but the motive of the suspect remains unclear.

Shooting in a US Mall

A shooting incident occurred at Destiny USA Mall in Syracuse, New York during Friday’s shopping craze, with at least one man reportedly injured in the leg. The news was first reported on Twitter and later confirmed by the Syracuse Police Department, which stated that the shooter was not found following the incident. While the shooting apparently resulted from an assault or quarrel, some parts of the mall remained on lockdown for some time afterwards.

Paris’ busiest train station, Gare du Nord, was partially evacuated on Friday afternoon, following the discovery of an allegedly explosive device in a passenger’s bag during a random check. Authorities later determined that the item was an inactive mortar round, reportedly carried by a soldier.

Arrivals and departures were briefly delayed following the incident, as the station remains a popular destination for trains from the UK, Belgium, Germany, and the Netherlands, with services fully resuming later in the day.

#Breaking: Paris' Gare du Nord is being evacuated now following the discovery of an explosive device in a bag (photo.) https://t.co/s6sWv1d1z1

A man armed with a knife took between five and six people hostage at a bar on Rua do Rezende in Lapa, Central Rio de Janeiro on Friday, according to local media. The suspect began releasing hostages at 3:34 pm local time. The incident reportedly occurred after a quarrel with the bar’s owner, who has now also been released.

The suspect, reportedly identified as Danilo da Caipirinha, was said to be immobilised with a stun gun by the Special Operations Battalion after an eight-hour standoff. The incident ended without casualties and all hostages being released.