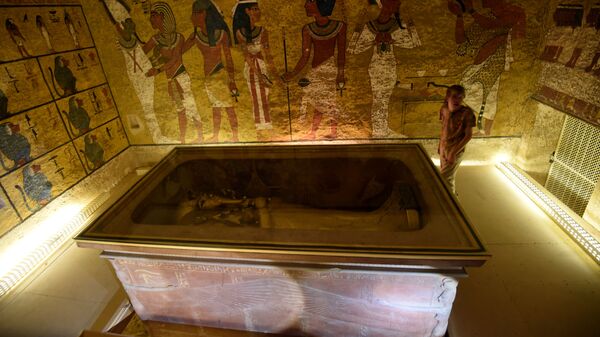 © AFP 2023 / MOHAMED EL-SHAHED
Subscribe
International
India
Africa
The Valley of Kings and Queens is visited by hordes of tourists annually, and it appears there is at least one person to thank for sheltering King Ramses’ remains from greedy 10 century BC tomb raiders.

It is believed to have initially been the last resting place of High Priest of Amun Pinedjem II, his wife Nesikhons, and their close attendants.

Pinedjem II died around 969 BCE – at a time of the Egyptian Kingdom's decline, with grave robbery typical of the period. And it appeared he had done something really cunning and sneaky to secure the remains of legendary Ramses IX.

“The mummified body of an almighty Egyptian king was discovered somewhere rather surprising", Hughes started off continuing:

“The trail starts here, in the ancient city of Luxor, when some rather curious things started to appear on the antiquities market", she said about the late 19th century.

Hughes depicted a flurry of “valuable riches belonging to some of Egypt’s most famous Pharaohs” adding no one was sure where they had originated from.

However, as a result of a number of inquiries, the inquisitive authorities determined that they were being sold by a man called Abd el-Rassul, a local farmer.

"The commercially-oriented farmer was immediately taken in for questioning and was reportedly tortured, before he revealed the source of the growing numbers of his treasures", the TV historian recounted adding that el-Rassul then took archaeologists to the tomb, down into a 13-metre shaft.

“Down it there were over 40 mummies and they were Pharaohs and Queens and other members of the royal family", Dr Hughes went on telling an intriguing story of how the High Priest who had first discovered 3,000 years back that robbers were raiding tombs in the Valley of the Kings and Valley of the Queens where Egypt’s pharaohs and nobility were buried.

“Pinedjem realised they were taking the bodies, too and, for him, this wasn’t just robbery, this was a desecration, this was destroying their chances of an eternal afterlife, so he knew he had to act fast", Hughes recounted, noting Pinedjem even called his stunned followers to join him in a risky mission to break into the tombs, steal the royal bodies and hide them in the shaft.

“They hid here, undisturbed, for close on 3,000 years, until el-Rassul’s goat gave away their hiding place".

Mummies of pharaohs are currently in Cairo, making an extraordinary site and drawing tourists like a magnet.

In a no less extraordinary Ancient Egypt-related revelation, made by TV historian Dan Snow in a Channel 5 documentary, it was suggested the “unfinished” details in King Tutankhamun’s undersized tomb could be evidence of his assassination by those wishing to fill a power vacuum in the country.