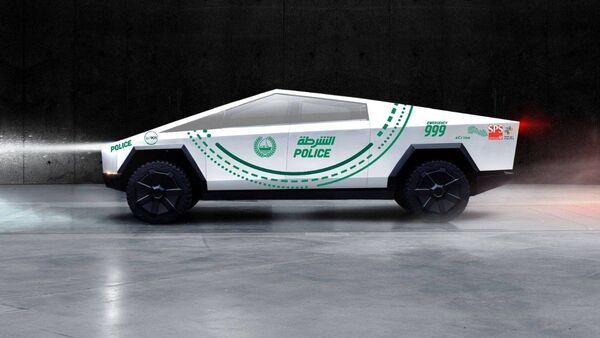 © Photo : Dubai Police/twitte
Subscribe
Last week, Tesla introduced its long-awaited Cybertruck at an event in Los Angeles, followed by the launch of preorders though the start of production is not scheduled to begin until 2021 or late 2022.

The Dubai police have unveiled a new car for its luxury vehicle fleet, the recently introduced Tesla Cybertruck.

​Besides the newly added Cybertrack, the vehicle fleet of the Dubai police includes an Aston Martin One-77, a Bentley Continental GT, a Bugatti Veyron, Ferrari FF, Lamborghini Aventador, and more.

Big Brands Unite in Making Meme Versions of Elon Musk’s Cybertruck on Twitter
So far, it's still unclear when the Dubai police will receive the Cybertrack as its production is not scheduled to start until 2021 or late 2022. Despite the uncertainty in the production date, Elon Musk said on Monday that the company had received 200,000 preorders on the vehicle.

Tesla's recently unveiled Cybertrack has a starting price of $39,900, it's exterior is made of newly developed stainless steel, the same metal that's used for SpaceX rockets and is capable of towing up to 14,000 pounds.