This Week in Pictures: 23-29 November

Sputnik's weekly photo gallery presents a collection of pictures that capture the most important and eye-catching events that occurred across the globe during the past seven days.

The past week has featured a number of festivals and events in various countries, such as the 2019 American Music Awards in Los Angeles, "Miss Fashion 2019 – Goddess of the Universe", a pageant, and Pope Francis' Holy Mass in Nagasaki, Japan – as well as incidents such as an earthquake in Albania and heavy floods in Venice, Italy.

Check out this gallery to catch up on the most important news that you might have missed! 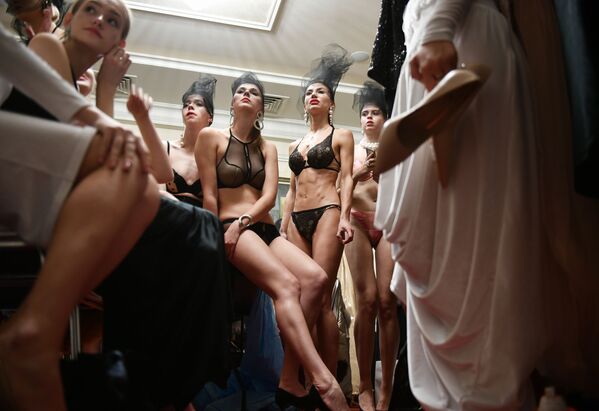 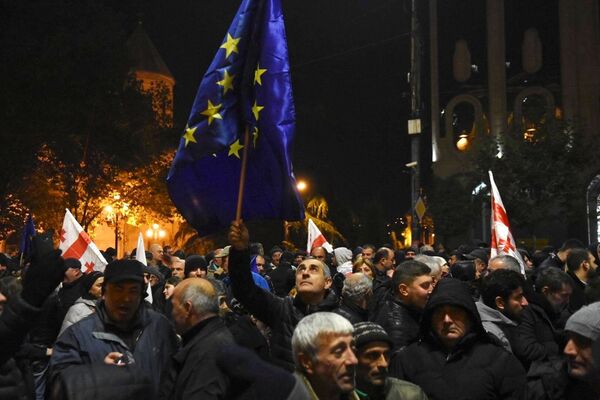 2/30
© Sputnik / Stringer
/
Go to the mediabank
Protesters in Tbilisi, Georgia. The demonstrations have been ongoing since 14 November, when lawmakers decided not to pass legislative amendments that would have changed the voting system to a proportional one. The rallies have grown violent, with law enforcement resorting to water cannons to disperse a crowd that blocked the entrance to the parliament building. 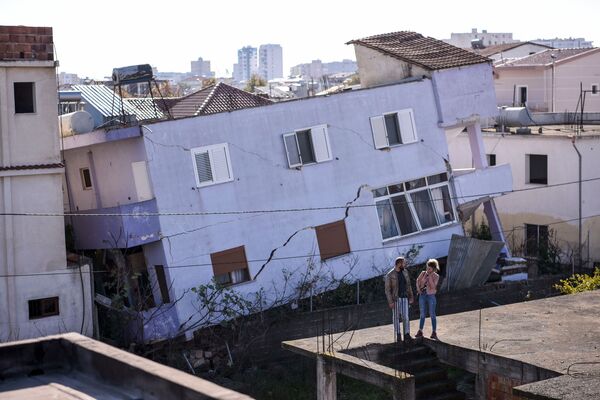 3/30
© AFP 2022 / Armend Nimani
People stand in front of a collapsed building in the town of Durres, western Albania on 27 November, 2019, after an earthquake hit Albania. Albania was in national mourning on 27 November as emergency workers continued to pull bodies from the ruins of buildings gutted by a violent earthquake. Tirana declared a state of emergency in the areas hardest-hit by the pre-dawn earthquake on 26 November: the coastal city of Durres and the town of Thumane, where victims were trapped under collapsed buildings. 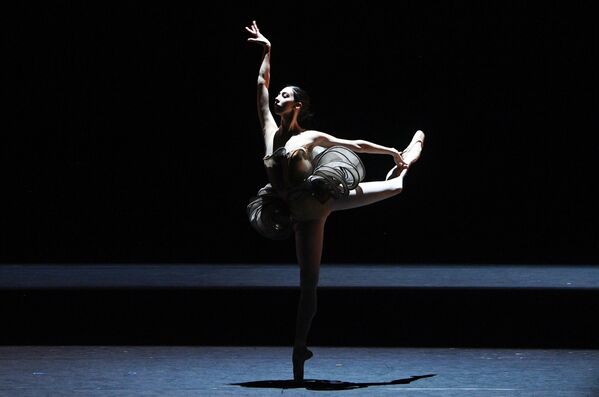 4/30
© Sputnik / Eugene Odinokov
/
Go to the mediabank
Ana Turazashvili, a soloist at the Bolshoi Theatre, performs her part in the ballet "Like a breath". 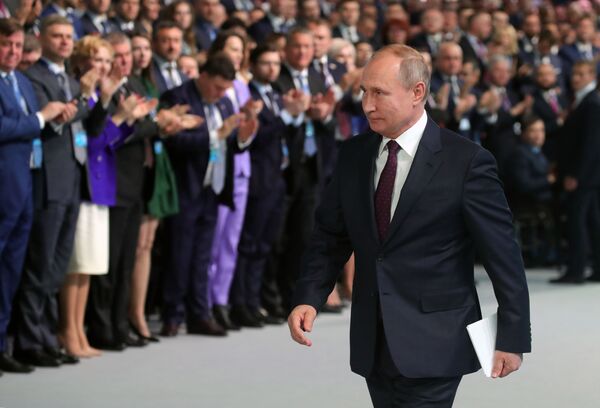 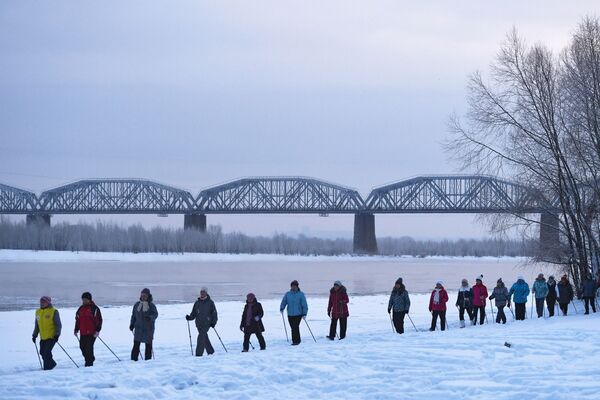 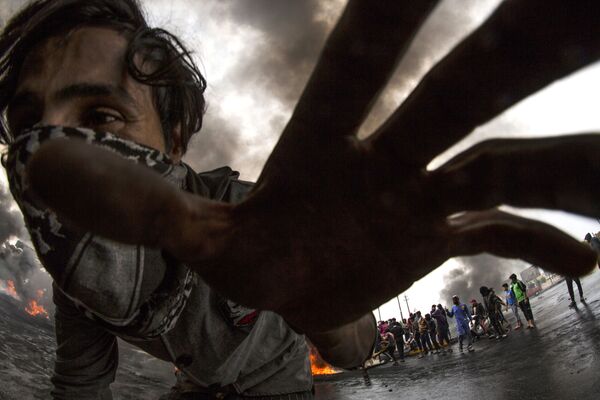 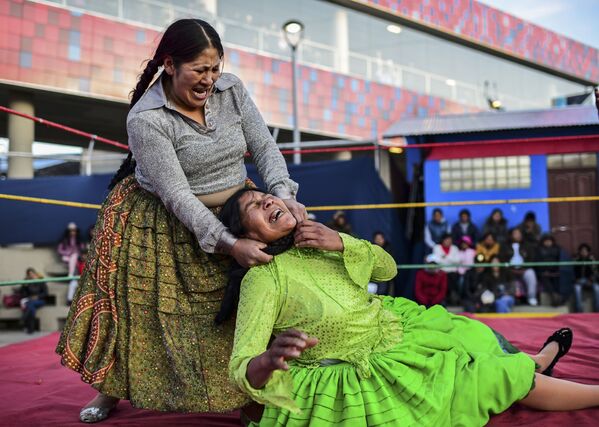 8/30
© AFP 2022 / Ronaldo Schemidt
Bolivian wrestler Ana Luisa Yujra (L), aka "Jhenifer Two Faces" and Lidia Flores, aka "Dina, The Queen of the Ring", both members of the Fighting Cholitas, fight at the Sharks of the Ring wrestling club in El Alto, Bolivia, on 24 November 2019. After a fortnight hiatus due to anti-government protests and blockades, the Fighting Cholitas are back in the ring. The unrest was triggered by the disputed 20 October election, which Evo Morales claimed to have won and opposition groups have said was rigged. 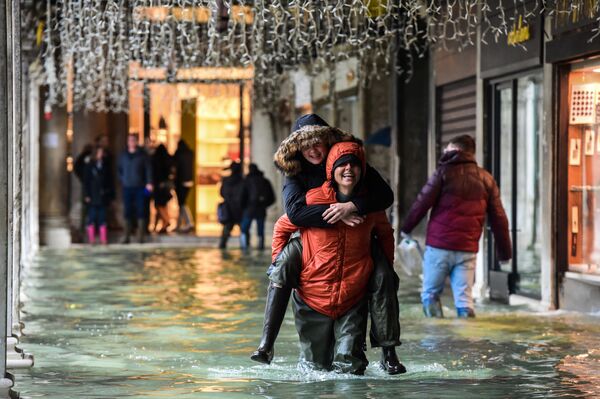 9/30
© AFP 2022 / Miguel Medina
A person carries another across a flooded arcade on 24 November 2019 in Venice during the high tide "Acqua Alta" meteorological phenomenon. Flood-hit Venice was bracing for another, though smaller, high tide on 24 November after Italy declared on 15 November a state of emergency for the UNESCO, city where perilous deluges have caused millions of euros’ worth of damage. 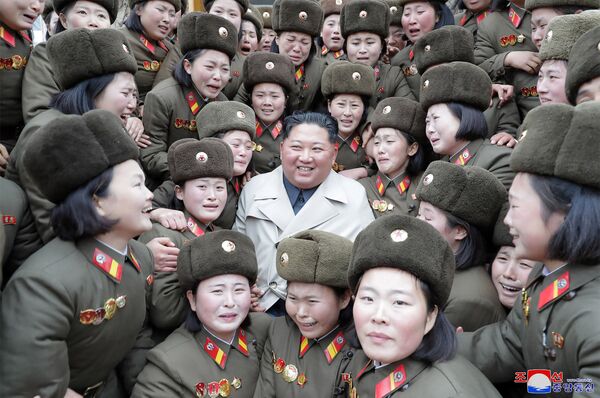 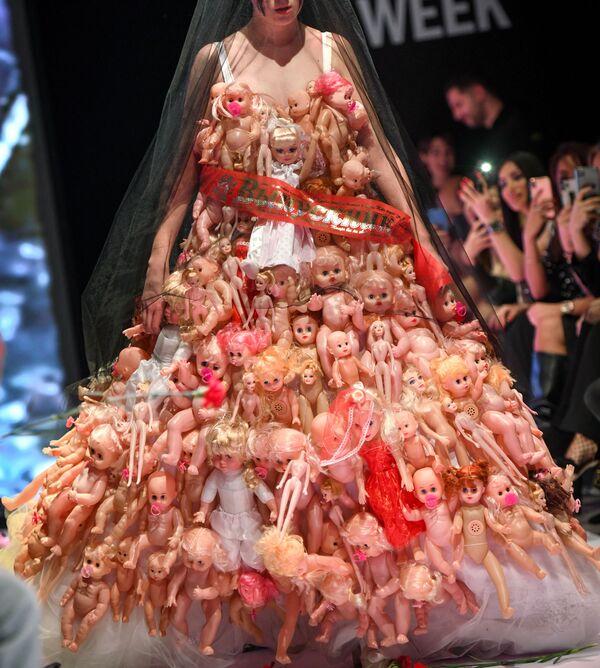 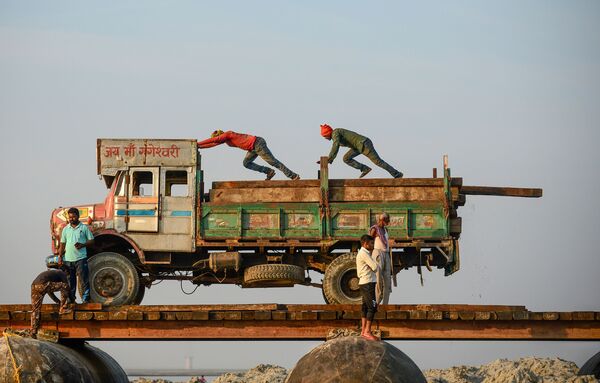 12/30
© AFP 2022 / Sanjay Kanojia
Labourers push wooden boards before carrying them to construct a temporary pontoon bridge over the Ganges River for the upcoming Hindu festival of Magh Mela in Allahabad on 24 November 2019. Magh Mela is held every year on the banks of Triveni Sangam - the confluence of the three great rivers Ganga, Yamuna, and the mystical Saraswati - in Allahabad during the Hindu month of Magh, which corresponds to mid-January – mid-February. 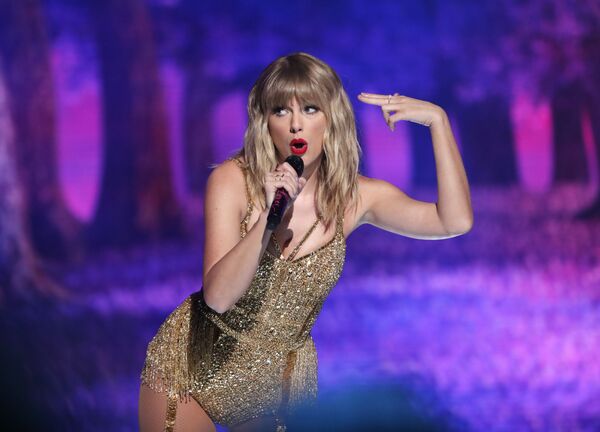 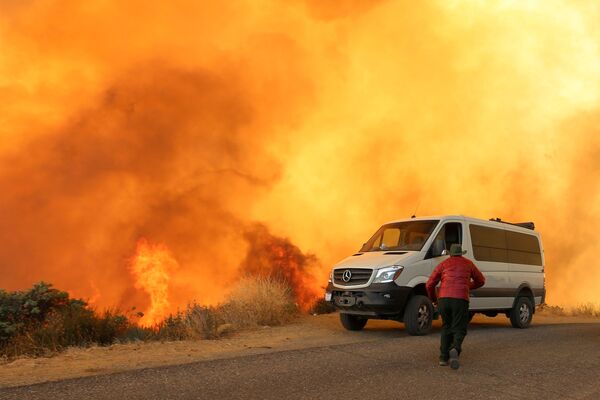 14/30
© Photo : David McNew
A man rushes to move his van as flames approach from a wildfire dubbed the Cave Fire, burning in the hills of Santa Barbara, California, US, 26 November 2019. 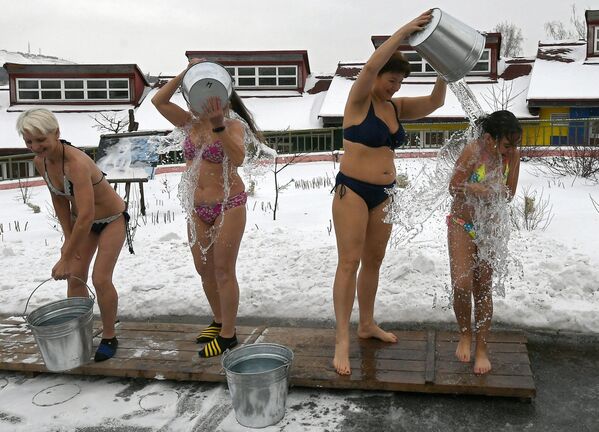 15/30
© Sputnik / Ilya Naymushin
/
Go to the mediabank
Members of cold training club "Polar Bear" pour freezing water over themselves during the celebration of International Polar Bear Day near Krasnoyarsk, Russia. 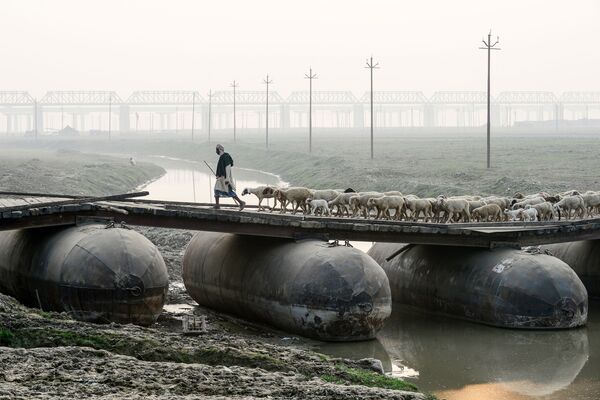 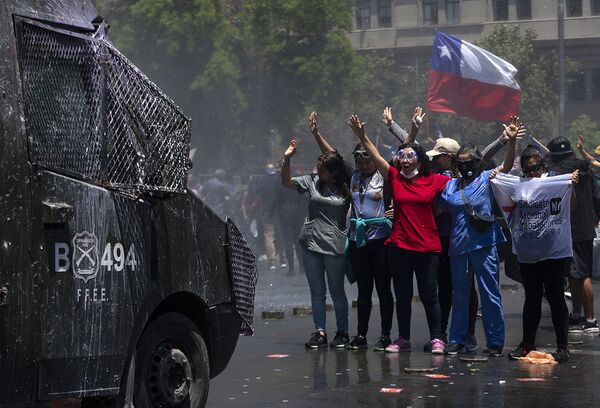 17/30
© AFP 2022 / Claudio Reyes
Demonstrators stand in front of a riot police vehicle during a protest against the Chilean government in front of the La Moneda presidential palace in Santiago on 26 November 2019. Furious Chileans have since 18 October been protesting social and economic inequality and against an entrenched political elite that comes from a small number of the wealthiest families in the country, among other issues. 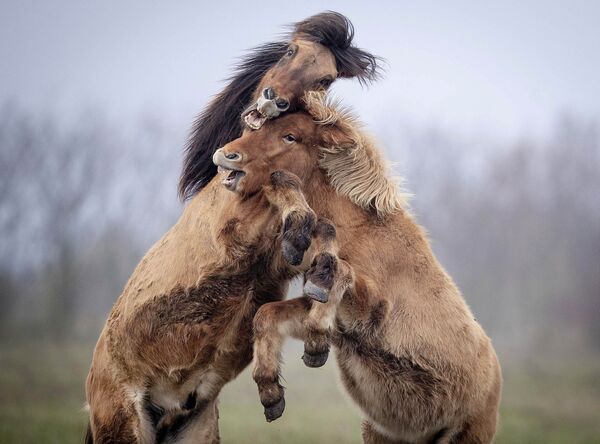 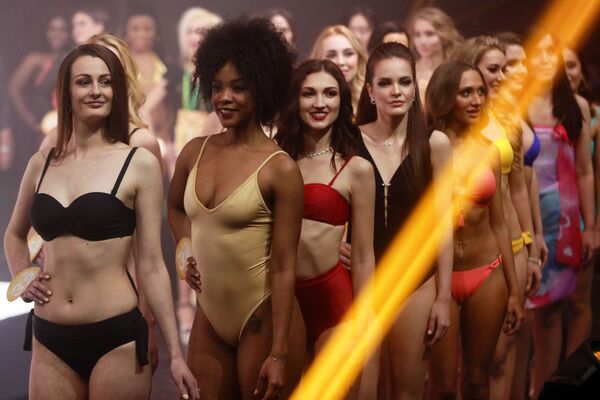 19/30
© Sputnik / Anton Denisov
/
Go to the mediabank
Finalists of the international "Miss Fashion 2019 – Goddess of the Universe" pageant in Vegas City Hall in Moscow. 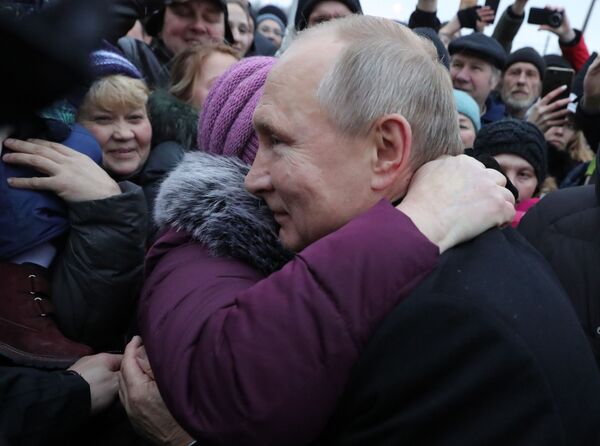 20/30
© Sputnik / Mikhail Klimentyev
/
Go to the mediabank
Russian President Vladimir Putin speaking to people after unveiling a monument to the late Russian and Soviet writer and public figure Daniil Granin. 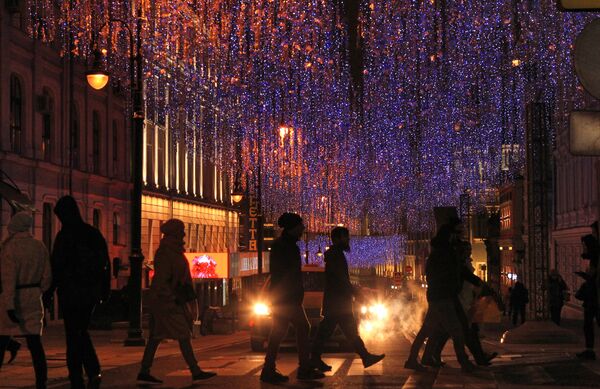 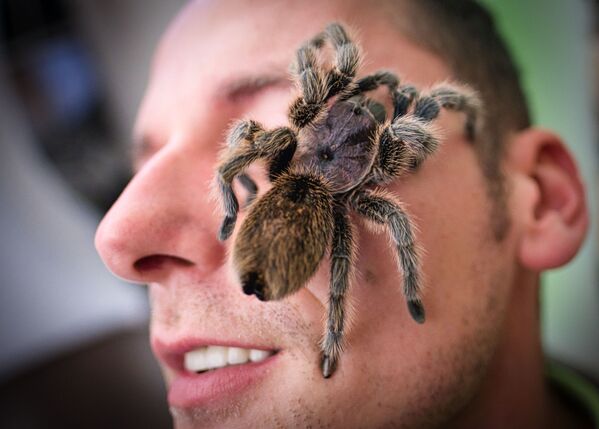 22/30
© AFP 2022 / Peter Steffen / dpa
A Chilean rose tarantula (Grammostola rosea) rests on the face of a visitor at a giant spider and insect exhibition in Hanover, northern Germany, on 23 November 2019. 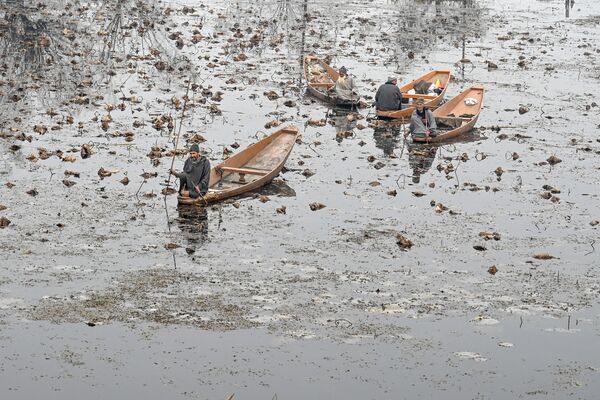 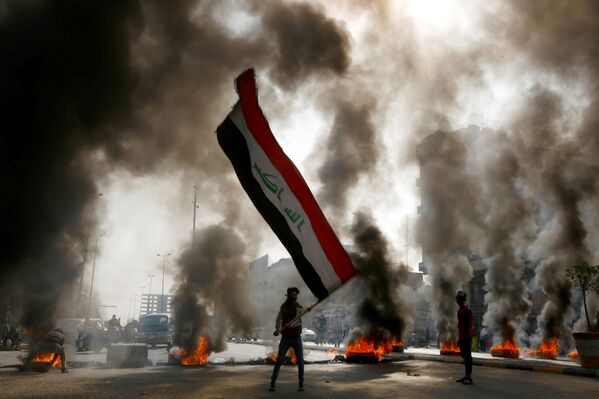 24/30
© REUTERS / Alaa al-Marjani
A protester holds an Iraqi flag amid a cloud of smoke from burning tyres during ongoing anti-government protests in Najaf, Iraq on 26 November 2019. 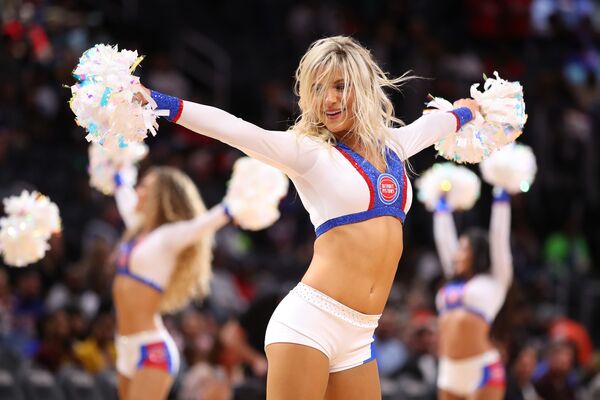 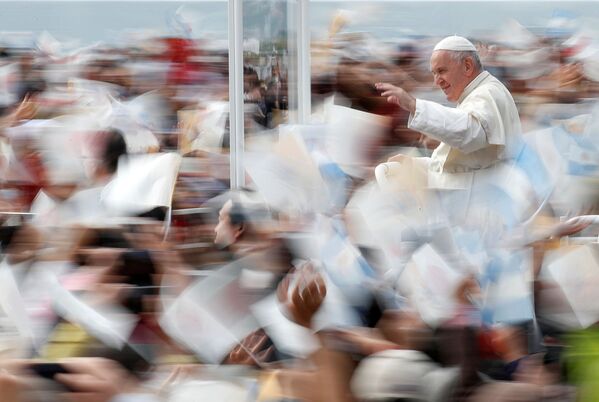 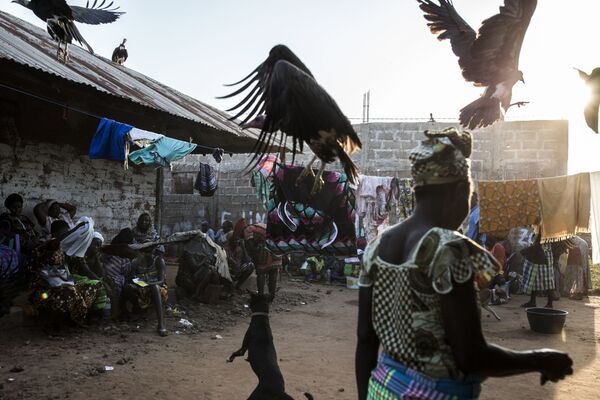 27/30
© AFP 2022 / John Wessels
Hooded vultures are chased away by a dog as they look for scraps after a family slaughtered a cow at a funeral celebration in Bissau on 26 November 2019. Tens of thousands of hooded vultures flock to the city of Bissau in search of food left behind in heaps of garbage or around market areas. 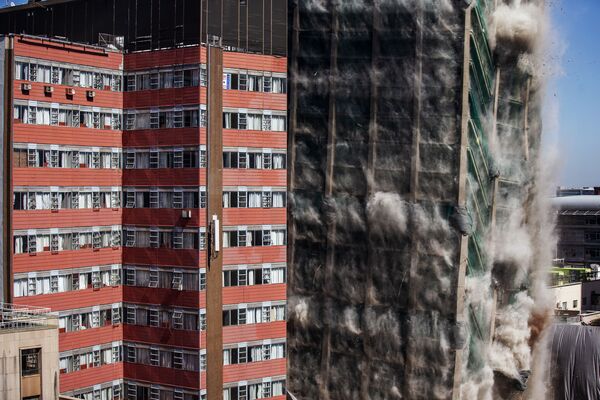 28/30
© AFP 2022 / Michele Spatari
This picture, taken on 24 November 2019, shows the Bank of Lisbon building imploding in Johannesburg, South Africa. Johannesburg CBD's iconic Bank of Lisbon building has been demolished after being deemed structurally unfit following a 2018 fire that lasted for three days and claimed the lives of three firefighters. 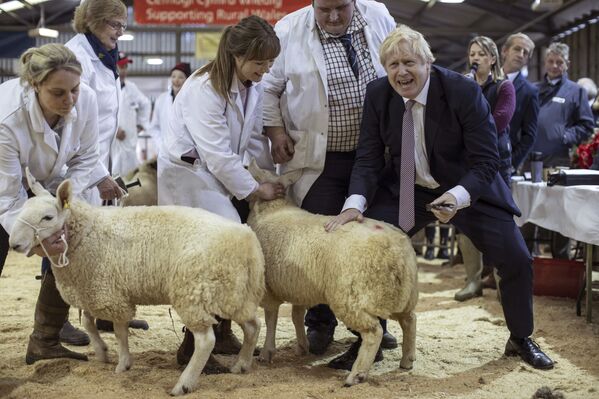 29/30
© AP Photo / Dan Kitwood / Pool
Britain's Prime Minister Boris Johnson visits the Welsh County Show in Llanelwedd, Wales, on Monday, 25 November 2019. Boris Johnson’s party is campaigning on a promise to “get Brexit done” by taking Britain out of the European Union on the scheduled date of 31 January if it wins the election. 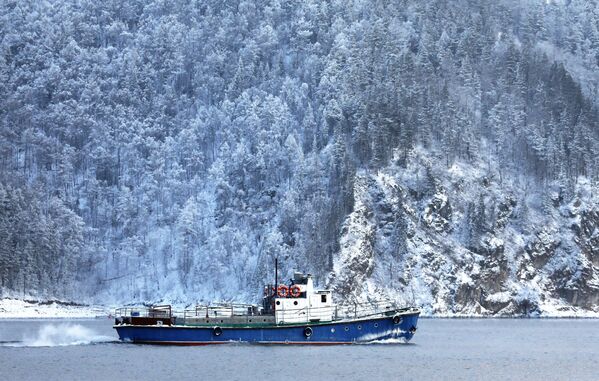 30/30
© Sputnik / Ilya Naimushin
/
Go to the mediabank
A boat navigates along the Yenisei River in Krasnoyarsk Krai, Russia
Newsfeed
0
Access to the chat has been blocked for violating the rules . You will be able to participate again through:∞. If you do not agree with the blocking, please use the feedback form
The discussion is closed. You can participate in the discussion within 24 hours after the publication of the article.
To participate in the discussion
log in or register
loader
Chats
Заголовок открываемого материала