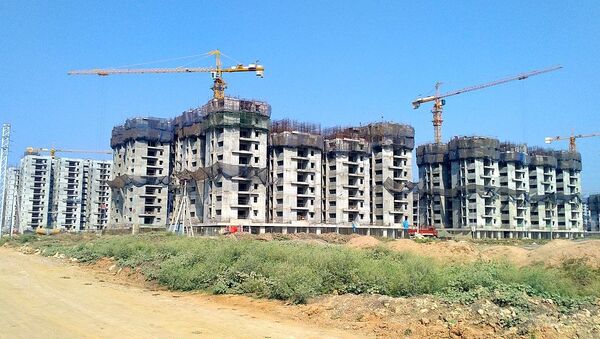 CC BY-SA 4.0 / IM3847 / NGO housing under construction in Amaravati (March 2019)
Subscribe
International
India
Africa
New Delhi (Sputnik): Construction work at Amaravati, a planned city in the southern Indian state of Andhra Pradesh, has been stopped since June 2019 after the state voted in a new ruling party.

#ChaloAmaravati (Let’s Go to Amaravati) is trending on Twitter in India following the shutdown of construction work in the planned capital city of Andhra Pradesh.

With more than 50,000 tweets, Andhra Pradesh residents are supporting a visit to Amaravati to check on how the construction is proceeding.

Amaravati is a result of sacrifice made by thousands of farmers who volunteered to pool their lands for the cause of the State. @ysjagan must stop the fake propaganda on the Capital and respect what the farmers have done #ChaloAmaravati #PeoplesCapitalAmaravati#SaveAmaravati pic.twitter.com/z9GzMxihhq

This is the biggest blunder mistake done by Andhra people#PeoplesCapitalAmaravati#ChaloAmaravati pic.twitter.com/8VtFjo3bTf

A dream capital it has it's own regnance and status .
We stand with Andhras one and only capital .
Andhra people dream AMARAVATHI
#ChaloAmaravati pic.twitter.com/7Hrk8V6UZF

Being a Human we can't live without shelter then how would 5cr people would live without capital for their #NativeLand 2015-19 as then gov took it prestigiously and started and this gov is not at all interested in public interest#ChaloAmaravati#PeoplesCapitalAmaravati pic.twitter.com/sxx9fdrihv

Former state chief of Andhra Pradesh and leader of opposition Chandrababu Naidu's convoy, who is visiting the site on Thursday, has been obstructed by protesting farmers, who are saying that they have been duped.

Pro #YSRCP farmers tried obstructing the convoy of #TDP chief #ChandrababuNaidu who is visiting #Amaravati capital region along with his party leaders. stone pelted and sleeper hurled on the bus carrying the former CM. #AndhraPradesh pic.twitter.com/RQkb6vYRs0

​​​The farmers who had given their land to build the planned capital moved to ask the high court to intervene in the matter last week. The farmers were promised that Andhra Pradesh needed a capital and their lands would be put to use in developing one.

They asked the court to direct the government to resume construction work in Amaravati as “it is against the spirit of the Andhra Pradesh Capital Region Development Authority (APCRDA) Act 2014”.

The farmers went to court after a Singapore Consortium pulled out of the project last week. The previous government in Andhra Pradesh and the Singapore consortium in 2017 established a multi-layered partnership structure for the development of the Amaravati Capital City Start-Up Area Project.

Soon after Reddy came to power in May, the World Bank and the Asian Infrastructure Investment Bank withdrew $500 million in funding they had promised for the project.

With the construction work halted, high court judges, members of legislative assembly and officers are living in rented accommodation far away from Amaravati as work on their quarters has also been stopped.