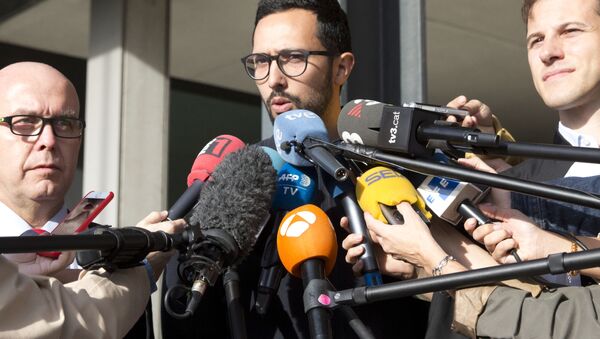 Valtonyc was sentenced to three and a half years in prison for a song he released in 2012, on charges including glorifying terrorism, insulting the Spanish crown and threatening statements.

Michal Bobek, a European Court of Justice advocate general, has argued Madrid cannot extradite rapper Josep Miquel Arenas, who performs under the alias Valtonyc, based on a harsher version of the penal code introduced after the events he was tried over.

Two years of his sentence related to glorifying terrorism, for which the maximum penalty was increased by three years in 2015. Before his prison term was set to begin, Valtonyc fled to Belgium and claimed political asylum – ever since, Spain has been pursuing his extradition via European Arrest Warrant (EAW). However, the Warrant cited the three-year maximum for the charge, long enough to nullify the EAW’s requirement to verify double criminality.

​In considering the case, Bobek argued Valtonyc could only be extradited on the basis of the pre-2015 Spanish statute, on the basis this position would offer a "simple, clear and foreseeable legal framework". An advocate general's opinion is not binding on the Court of Justice's final decision, although they do often cohere – the decision will also be only one of the considerations for the Court.

Belgium’s court of first instance rejected his extradition in September 2018, on the basis Valtonyc's statements fell within freedom of expression and as such weren’t a crime for which he could be deported back home.

Today the advocate general of the CJEU in Luxembourg released his opinion in the Valtonyc Case, supporting our point of view. Spain should not bend the rules in its pursuit of extradition. Another step closer to non-extradition. @EU_Commission @Valtonyc

​Valtonyc's lawyer, Simon Bekaert, celebrated Bobek’s sentiments on social media, demanding Madrid “not bend the rules in its pursuit of extradition” and claiming the judge’s opinion was “another step” towards non-extradition.

Beltran, 26, has long-sung lyrics are based on his communist, anti-capitalist Republican and anti-fascist ideology - although he was barely known in Spain, let alone worldwide, prior to his legal problems erupting in August 2012, when he was arrested aged-18 and convicted of slander, Lèse-majesté, and glorifying terrorism in his songs. Court papers referenced lyrics "supporting and praising" groups including ETA and GRAPO, and wishing death on politicians and members of the Spanish Royal Family.

Valtonyc would've been the first Spanish musician to be imprisoned since the 1977 restoration of democracy in Spain - but on 23rd May 2018, the day before he was to enter prison, he fled the country. Two months later he reported to police in the Belgian city of Ghent, was released under conditions the same day, and has remained free in the country ever since.