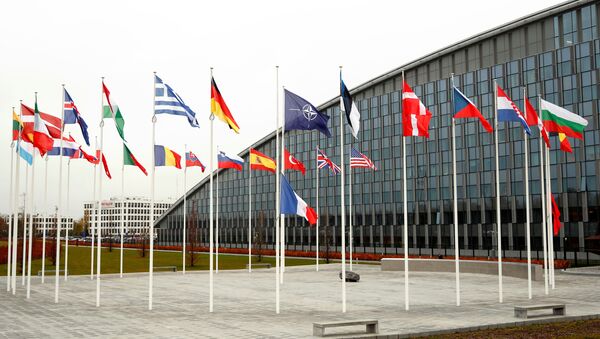 French President Emmanuel Macron and NATO Secretary-General Jens Stoltenberg held a press conference in Paris ahead of the NATO leaders meeting in London on 3-4 December.

Turkey cannot expect solidarity from NATO allies and at the same time launch an offensive in Syria, French President Emmanuel Macron said during a press conference with NATO chief Jens Stoltenberg in Paris.

On 9 October Turkey launched a military operation in northern Syria to oust Kurdish militants, establish what it terms a safe zone on the border and accommodate millions of Syrian refugees there. Damascus described the operation as undermining Syria's sovereignty and territorial integrity. On 17 October, Ankara and Washington agreed on a 120-hour ceasefire to allow the withdrawal of Kurdish militants from the border area. After the ceasefire ended, Turkey and Russia signed an agreement outlining conditions for the peaceful withdrawal of Turkish forces and the organisation of joint patrols by the Russian military police and the Turkish army.

During the meeting with Stoltenberg on Thursday, Macron said that his recent comments about NATO being 'brain dead' were 'a useful wake-up call' for the alliance.

"I totally stand by raising these ambiguities because I believe it was irresponsible of us to keep talking about financial and technical matters given the stakes we currently face," Macron said.

In an interview with the Economist earlier this month, Macron questioned NATO's ability to ensure collective defence and said there was a complete absence of coordination between the EU and the US on strategic decisions within the alliance. Those words prompted a wave of criticism towards Macron from his fellow members.