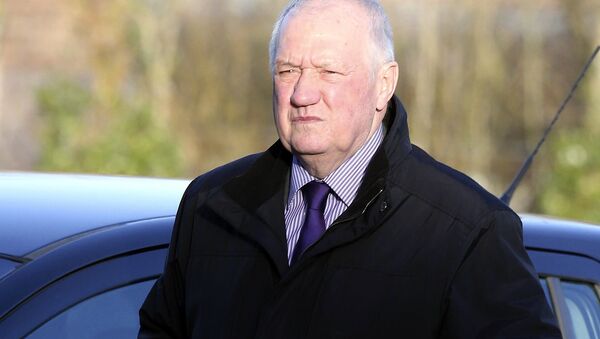 © AP Photo
Subscribe
Chris Summers
All materialsWrite to the author
In April 1989 at an FA Cup semi final at Sheffield Wednesday’s Hillsborough stadium 95 Liverpool fans died from crush injuries. Thirty years later a jury has finally decided who was to blame.

A jury at Preston Crown Court has found David Duckenfield - who was the match commander for South Yorkshire Police - not guilty of the manslaughter by negligence of 95 Liverpool football fans.

Duckenfield, 75, was the man who issued the order to open a gate was at the Leppings Lane end of the ground just before kick off as Liverpool prepared to take on Nottingham Forest at Hillsborough, which had been chosen as a neutral venue.

Two trials at Preston Crown Court heard it was Duckenfield's decision not to delay the 3pm kick off and to instead open Gate C. He said he feared people would be killed in the crush outside the ground, but the opening of the gate instead caused a fatal stampede inside.

​Earlier this year Sheffield Wednesday’s former club secretary Graham Mackrell, 69, was found guilty of failing to discharge a duty under the Health and Safety Act last month and was fined £6,500.

But manslaughter is a far more serious charge and Duckenfield would have been sent to prison if convicted.

On Thursday, 28 November, Barry Devonside, whose son Christopher, 18, died in the disaster, said: "I'm shocked and stunned by the verdict of the jury."

The Independent Office for Police Conduct’s Director for Hillsborough, Mike Benbow, said: “We recognise today’s verdict has huge significance for the families of the 96 victims of the Hillsborough disaster, its survivors, and the many thousands of people affected by the tragedy.”

The Hillsborough saga, and the campaign for justice fought by the victims’ relatives, spans three decades.

Hillsborough Trial: Judge summing up: Tells the jury that QC for Ch Supt Duckenfield "cautions" against using the 'lie' Duckenfield told at 3:15pm, that fans had forced the gate, "as a shortcut to conviction, which he suggests the prosecution is attempting to do." (Thread)

​Duckenfield's QC, Ben Myers, told the jury at the first trial the prosecution was "breathtakingly unfair" and he said the events of Hillsborough had to be seen through the prism of policing in the 1980s.

He said hooliganism was an intrinsic part of football in 1989 - four years before, Liverpool fans were involved in an equally notorious tragedy — the Heysel disaster in Belgium, when 39 Juventus supporters died after a wall collapsed as they fled an attack by English hooligans.

But the media, and especially The Sun newspaper, printed a tissue of lies in the immediate aftermath of the Hillsborough disaster.

Ex Ch Supt David Duckenfield, found not guilty of manslaughter by a 9-1 majority of a jury at Preston crown court, has been hugged by his wife, who has been in the public seats supporting him constantly, through the trial and retrial.

​The Sun, who received much of their information from the Conservative MP for Sheffield Hallam, Irvine Patnick, claimed Liverpool fans had looted corpses and urinated on the dead.

It was completely untrue and it so enraged the people of Liverpool that sales of The Sun on Merseyside never recovered, despite a fulsome apology being printed in 2016.

But why did it take 30 years to bring the case to court?

In the immediate aftermath of the disaster Lord Justice Peter Taylor compiled a report which recommended the removal of perimeter fencing in UK football grounds and also suggested they become all-seat stadia.

His report also accused Duckenfield of “blunders of the first magnitude”.

​Margaret Thatcher’s government took no action to bring prosecutions against any police officers. Irvine Patnick was later knighted and only lost his seat in 1997 during Tony Blair’s landslide election.

In March 1991, after the longest inquest in British history a jury returned a verdict of accidental death. Duckenfield retired from South Yorkshire Police later that year.

The inquest verdict rankled with the relatives of the victims who campaigned for “justice” for years but in 1997 the new Labour government reviewed the case but Home Secretary Jack Straw ruled out a new inquiry.

The following year the families brought a private prosecution against Duckenfield and his deputy, Superintendent Bernard Murray, who was acquitted.

In 2012 the High Court quashes the accidental death verdicts and orders new inquests. 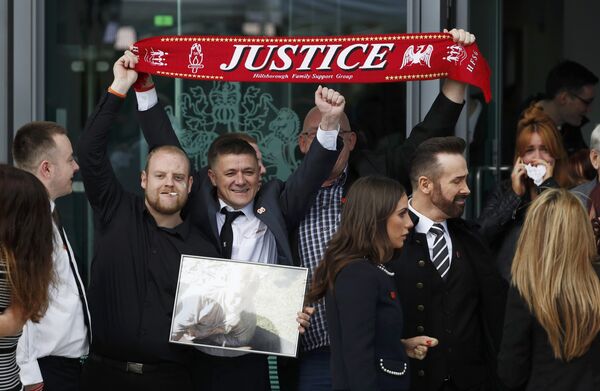 Relatives react after the jury delivered its verdict at the new inquests into the Hillsborough disaster, in Warrington, Britain April 26, 2016.
© REUTERS / Phil Noble

Four years later an inquest jury returns a verdict of unlawful killing and the Crown Prosecution Service decides to bring charges against Duckenfield, Mackrell and several others.

The family of Tony Bland - who suffered catastrophic injuries at Hillsborough - switched off his life support machine in 1993 as he showed no signs of recovery. But Duckenfield was not charged with his manslaughter as the law in 1989 was that if someone died more than a year and a day after an incident the person responsible could not be charged.

Lord Justice Taylor.... the failure to close off the tunnel was "a blunder of the first magnitude"

​In his directions to the jury, the Judge, Sir Peter Openshaw, said they had to decide if Duckenfield had “failed to take reasonable care” to identify the hazards at the Leppings Lane end and to take action to relieve crowding pressure in the tunnel and the central pens of the terrace.

Sir Peter asked them: “Are you sure that his breach - or breaches - of that duty of care caused, or at least substantially contributed, to the deaths of the 95 persons named on the indictment?”

Their verdict suggests they answered in the negative.

000000
Popular comments
About time, ten people's passive actions should not be accountable for the actions of thousands, that's how we all end up in the Big Brother box. It is mindless enthusiasm that has caused the tragedy, probably the first since the war, people themselves were in an experience whereby they are no longer in a protective bubble when running rampant on mass, I feel for those deceived by times education in this scenario, particularly so in given the competitive but spirited nature of the event, a true guide of the times, nevertheless I believe the coppers need a counselling session, not a trial.