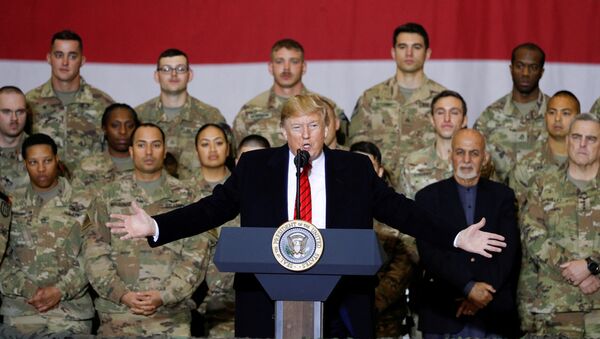 A plane carrying the president, White House national security adviser Robert O'Brien, a small group of aides and Secret Service agents, and a pool of reporters aboard landed at Bagram Airfield. Trump met with Afghani President Ashraf Ghani and addressed US troops on the ground.

United States Army General and the 20th Chairman of the Joint Chiefs of Staff Mark Milley introduces the 45th President of the United States @realDonaldTrump at Bagram Airfield in Afghanistan. HAPPY THANKSGIVING!!🇺🇸🇺🇸 pic.twitter.com/uMRA5t5yyk

He said he believed Taliban militants would come to terms over a ceasefire in their war with the local government.

It is Trump's first visit to the country since becoming the US President.

The US President also confirmed during the meeting with Ghani that he would like to reduce the number of US troops in the country to 8,600.

Previously, Donald Trump postponed peace talks with the Taliban movement, noting that the negotiations were 'dead'.

US officials had been conducting peace negotiations with the Taliban for about a year, which would ensure the withdrawal of foreign troops from the war-torn country, yet so far to no avail.

The American military, in the meantime, is reducing its presence in the country, as, according to numerous reports, the Trump administration has already reduced its strength in Afghanistan by 2,000 troops over the last year.