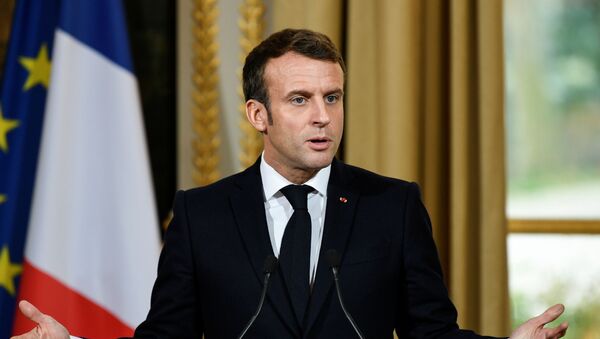 MOSCOW (Sputnik) - French President Emmanuel Macron said on Thursday that Paris had not accepted Russia's proposal for a moratorium on the deployment of medium- and shorter-range missiles in Europe.

"We did not accept the moratorium proposed by Russia... but we took it as a basis for discussion," Macron said during a press conference with NATO Secretary General Jens Stoltenberg, broadcast on Champs Elysees' Twitter.

In September, Russian President Vladimir Putin proposed a moratorium on the deployment of medium- and shorter-range missiles in Europe and other regions.

He sent his proposal to the main countries of Europe and Asia and to various international organizations. Russian Deputy Foreign Minister Sergei Ryabkov later said that NATO's reaction to this proposal was disappointing. NATO said the proposal for a moratorium was not credible because it ignored reality on the ground.

The US formally suspended its obligations under the INF Treaty at the beginning of the year and unilaterally quit it, accusing Russia of not fulfilling its commitments. Russia denied the allegations. The treaty, which banned any ground-launched ballistic and cruise missiles with ranges of 500 to 5,500 km, was terminated on 2 August.

Emmanuel Macron on Thursday called on NATO to have a "lucid, robust and demanding dialogue with Russia."

"The world has changed, the Iron Curtain has fallen, the Warsaw compact is gone and the alliance is still standing as the guarantor of our joint security. It requires that today we reconsider a number of important topics in this respect. First of all, lucid, robust and demanding dialogue with Russia. And I very much endorse the fact that I wanted to give new momentum to this dialogue," Macron told a press conference.

Macron added that the dialogue with Russia was "in the interest of peace and stability" in Europe.

The French president said in August he was expecting Russia and the European Union to create new European security architecture.