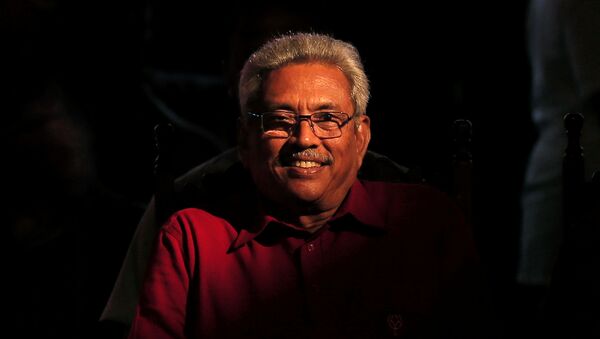 New Delhi (Sputnik): India is likely to use Sri Lankan President Gotabaya Rajapaksa’s two-day visit and his interest in development-related initiatives as an opportunity to remind him of the need to fast track completion of pending bilateral joint venture projects.

President Rajapaksa’s first state visit to India on 28 and 29 November, just 12 days after assuming office, is likely to focus on ways to cooperate in enhancing security in the Indian Ocean and to give a much-needed push to economic projects that have remained on the backburner for over two years.

Visiting India at the invitation of Indian Prime Minister Narendra Modi, the Sri Lankan president will have a packed official schedule in front him on Friday that will include ceremonial and official interactions with the Indian leadership.

The delegation-level talks scheduled for Friday afternoon will cover all aspects of bilateral engagement between the two countries, Ministry of External Affairs (MEA) sources said.

As regards joint venture engagement, India and Sri Lanka have a large list of pending and tightly scheduled infrastructure and economic projects to complete.

As per a Memorandum of Understanding inked in New Delhi on 25 April, 2017, in the presence of the then Sri Lankan Prime Minister Ranil Wickremesinghe and Indian Prime Minister Modi, there are at least six such joint venture projects meriting immediate attention.

These include a re-gasified Liquefied Natural Gas (LNG)-fired 500 MW power plant and a LNG terminal-cum- Floating Storage Regasification Unit (FSRU) in Kerewelapitiya near Colombo. Commercial entities from Sri Lanka, India and Japan are involved in these projects.

A piped gas distribution system and retail outlets for the supply of Compressed Natural Gas (CNG) to the transportation sector and the conversion of liquid fuel-based power plants to R-LNG (re-gasification of converting liquefied natural gas) -fired plants are other pending projects.

Besides the above, both sides have been in talks to construct a 50 MW (extendable to 100 MW) solar power plant in Sri Lanka’s Eastern Province and the joint development of 84 oil tanks in Trincomalee by the Lanka Indian Oil Corporation and the Ceylon Petroleum Corporation.

They have also agreed in principle to build a port, a petroleum refinery and other industries in Trincomalee and to jointly set up industrial zones or special economic zones across Sri Lanka.

To improve surface transport, Colombo had also approached New Delhi earlier to develop the Mannar-Jaffna and Mannar-Trincomalee Highway as well as the Dambulla to Trincomalee Expressway.

India had also approached Sri Lanka to build a Container Terminal (the East Terminal) within the Colombo Port complex and had made a bid for building an airport in Mattala near Hambantota.

Livestock development, water management and agro-based industries were other areas where expressions of interest were forwarded to Colombo from New Delhi.

The emphasis on accelerating joint ventures is significant as there has been slow movement on many of them.

The relations between India and Sri Lanka has been marked by close contacts at all levels, including political, economic, defence, security, intellectual, cultural, religious and linguistic.

India has always seen Sri Lanka as a priority destination for direct investment. Colombo is one of New Delhi’s largest trading partners in South Asia. Bilateral trade in 2018 was pegged at $4.93 billion.