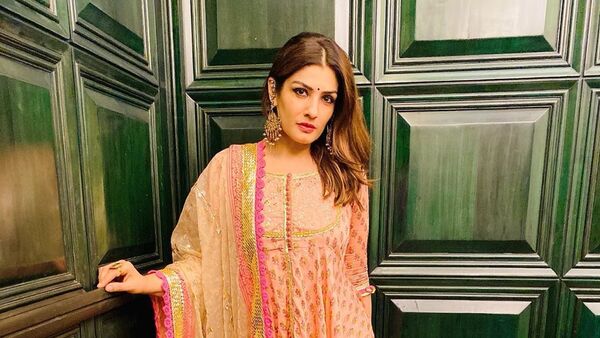 New Delhi ( Sputnik): From university tuition hike protests to a student protest against a Muslim professor for teaching Sanskrit, Bollywood ace Raveena Tandon, one of the most bankable stars of 1990s cinema, has never shied away from voicing her disagreement on pressing issues.

Actress Raveena Tandon, a recipient of the coveted National Film Award for Best Actress for her performance in the 2001 film by Kalpana Lajmi, “Daman: A Victim of Marital Violence”, in which she played a battered wife, feels it is important to set “our sights on the greater good”.

“In my opinion, outrage eliminates whatever has outlived its relevance. We should never let well-placed outrages dwindle. They give the direction that our country needs to progress. But sometimes our passion clouds our judgement. That's why it's important to set our sights on the greater good,” Raveena told Sputnik in an interview.prot

The actress feels that the entire Jawaharlal Nehru University row in India’s capital New Delhi, that saw students protest for days, demanding a complete rollback of a proposed hike in dormitory fees, has triggered a conversation about freedom of speech in the country.

“I think the facts of the issue are sketchy at best. It most definitely opened up the conversation about freedom of speech in the country. The incident also sparked a discussion about nationalism and human rights. Being an optimist, I look at the row as an opportunity to talk about the principles and laws that are the foundation of this nation,” she said.

Raveena reached her career's peak working with some of the great art film directors and doing realistic cinematic shorts “Shool”, “Aks” , “Satta” and “Maatr”. She was also the chairperson of the Children's Film Society of India.

Asked if India needs more responsible speakers like her who can motivate the youth positively, she said, “The young generation is extremely smart. They are multitasking at an incredible pace. They're not just involved in academics, they are super active on social media. They're the first ones to know about socially relevant issues. They don't need speakers.”

“I think responsible speakers and motivators are emerging from the younger lot such as Greta Thunberg and Malala Yousafzai. It is such a positive trend. My generation has a lot to learn from millennials,” the Bollywood actress said.

Known as “Mast Mast Girl” (hot and sexy), the actress is right now seen judging reality shows on Indian TV. But did she intentionally take a step back from Bollywood right now?

“Having grown up in a loving family, I always wanted a happy marriage and kids. I was never on a break per se. I was always shooting for projects that didn't require longer commitments. I wanted to be with my kids. I now realise that shooting for TV shows is just as challenging as shooting for a movie if not more,” she said.

Talking about other things that keep her busy, the actress also shared that she has penned four scripts for a digital platform.

“These projects will soon be moved to the production stage. For the longest time, I was secretive about my love for writing. It was very exciting for me to explore the creative processes of writing,” explains Raveena.

It has also been reported that one of her classic films “Andaaz Apna Apna” that starred Bollywood superstars Salman Khan, Aamir Khan, Karishma Kapoor along with Raveena herself is set for a remake.

The actress says that it would be more fun to see who the filmmakers will rope in for the remake.