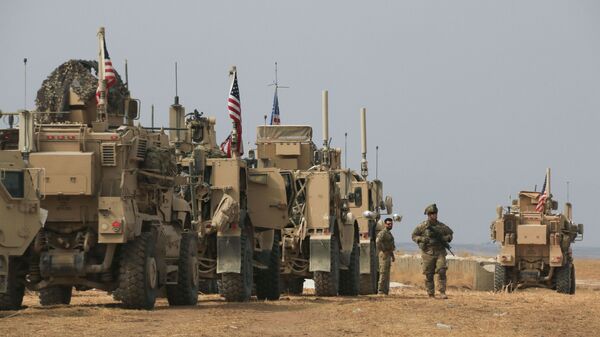 Despite US President Donald Trump’s repeated declarations of victory over Daesh, the US has - once again - announced a resumption in operations against the group. While the tug-of-war between the commander-in-chief and the Pentagon is apparent, one expert points out that there is one thing both parties can agree on: oil.

In a Saturday press conference, US Air Force Maj. Gen. Eric Hill announced that, following operations on November 22, a US-led coalition was able to not only capture a “significant amount” of small arms, ammunition and explosives, but also detained over a dozen Daesh soldiers.

“As long as Daesh presents a threat, we must stay vigilant to prevent it, for the sake of the region and our homelands,” he said, as reported by Military Times.

With this renewed effort to combat Daesh forces in Syria, it’s understandable that some observers are scratching their heads, considering the fact that the commander-in-chief has declared ad nauseum that those same Daesh forces have been eliminated over the past year.

Despite Trump’s intention to spread some holiday cheer back in December 2018 by announcing the US had “won against” Daesh, his followup, December 22 statement that “whatever remains” should be “easily” taken care of sent mixed messages. This led to a late January explanation that the “Caliphate will soon be destroyed,” which was followed by a February announcement of a “100% Caliphate victory!”

Soon afterward in March, Trump appeared on the White House lawn with a map of Daesh-occupied sites in Syria.

Asked about eliminating ISIS in Syria, Pres Trump pulls out two maps that show ISIS sites in red on the day he was elected, and the bottom map shows only a tiny red spot for ISIS that he says will be "gone by tonight." pic.twitter.com/aqA0V9pkRv

Fast-forward through similar ebbs and flows of alleged Daesh defeat throughout the year, and the US is again engaged in military efforts against the terror group

Peter Ford, the former British ambassador to Syria, joined Radio Sputnik’s Loud and Clear on Tuesday and explained to hosts Brian Becker and John Kiriakou that it was clear that Trump and the Pentagon initially had two different agendas regarding the Middle Eastern country.

Trump has openly expressed that he wants to remove troops from Syria and even ran on a platform of pulling troops out of foreign countries and avoiding “endless wars,” as he called them in his September 2016 speech to the Union League of Philadelphia.

However, Ford said, the Pentagon has been consistent in its use of “stalling tactics” to prevent the realization of Trump’s desires. “This is what we’re seeing now,” he added, “the Pentagon is pretending to be fighting [Daesh] yet again. They claim to have taken out a dozen [Daesh] operatives … Who knows whether these people who got killed were actually [Daesh]?”

Ford went on to explain that northeastern Syria is very “tribal” and has several “warlords” within a concentrated area.

“They key point is that there is no need for US forces to be there. Not when the Syrian government forces are ready and chafing at the bit to take over the burden,” he pointed out. “The real purpose of the US being there is not to fight [Daesh], but to stop [Syrian President Bashar al-Assad] from recovering territory. It’s as simple as that.”

With northeastern Syria containing “two-thirds of Syria’s exploitable oil and gas reserves,” according to Ford, a unified decision to keep a force there has been made by both the Pentagon and Trump, who openly admitted to White House reporters earlier this month that the US would remain in the area to ensure Washington would be “keeping the oil.”