#NoMoreBJP: Netizens Rise Against India’s Ruling Party After its Power Base Shrinks by 30 Percent 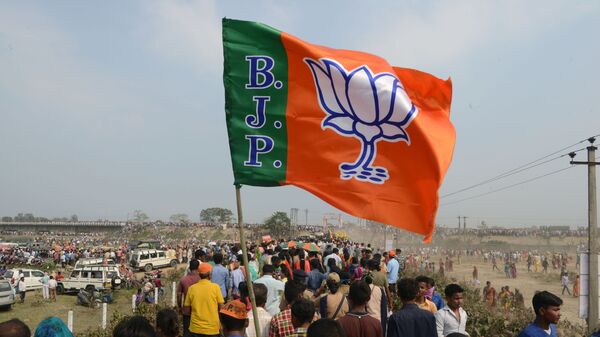 New Delhi (Sputnik): The dramatic turn of political events started in India’s second-largest state, Maharashtra, where the ruling Bharatiya Janata Party (BJP) failed to form a ruling coalition despite emerging as the largest party in the state legislature.

Twitter users have started trolling BJP, as India's ruling party has lost its grip in many states, the latest being i Maharashtra, where it had to concede power to an opposition alliance.

Netizens took aim at the Bharatiya Janata Party, with hashtags #NoMoreBJP and #BJPFreeIndia gaining momentum on Twitter, and have hared a map of India which shows saffron party losing its hue countrywide.

Power is not permanent and money will only get you so far. Now India is fighting back against the
fascism of #BJP#BjpMuktBharat #NoMoreBJP #BJPCheatsMaharashtra pic.twitter.com/xAto4wqw2F

What did Modi ji think?

He will continue to fool us & we will support him?

PM used his special powers to revoke Article 356 which can be used only on an emergency situation to a secret swearing- in. By doing so he has brought disrepute to PMO for his own personal gain and bite the dust.#NoMoreBJP pic.twitter.com/KeYQEp5iBW

BJP hit a road block with its sub-par performance in Haryana and Maharashtra elections in September. The saffron party secured 105 seats in Maharashtra elections out of 288 Assembly constituencies but its alliance with regional Shiv Sena alliance fell flat, as the latter sought a power-sharing formula, which was unacceptable to BJP. Finally BJP’s 15-year alliance with like-minded Shiv Sena ended, with Shiv Sena joining the opposite camp, bargaining in the process to head the government.

In northern Haryana, BJP's vote share was a mirror 36.49 percent, which was 22 per cent less in comparison to the Lok Sabha polls held in April-May 2019. The upcoming assembly elections in Jharkhand further unveil the tough challenges BJP is set to face.