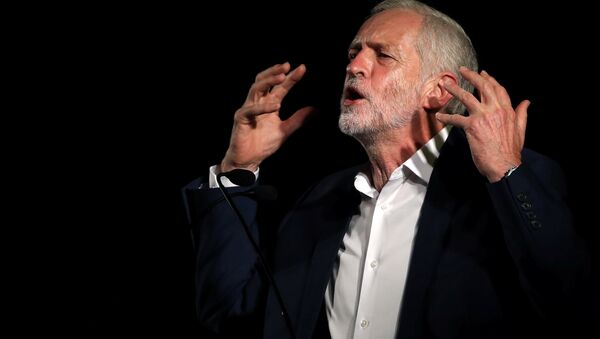 Jason Dunn
All materialsWrite to the author
As a prized national asset, the fate of the UK's National Health Service post-Brexit has come under scrutiny amid accusations by the opposition Labour Party. The party leadership alleges that the UK government plans to open it up to US companies following a "sweetheart" trade deal with the ruling Trump administration in the US.

During a general election speech on Wednesday, Labour leader Jeremy Corbyn produced 451 pages of unredacted documents which he says reveal UK government plans to put the National Health Service (NHS) on the table in trade deal negotiations with the US.

Holding the documents aloft, Mr Corbyn declared: "The US is demanding that our NHS is on the table in negotiations for a toxic deal – it’s already being talked about in secret. That could lead to the runaway privatisation of our health service."

Jeremy Corbyn says he has documents which "confirm" under Boris Johnson "the NHS is on the table and will be up for sale" to the US.

​He accused the Conservatives of trying to "cover it up… but today it’s been exposed."

Mr Corbyn emerged on the podium and held up redacted government papers, followed by a second unedited version of the same documents.

Specifically, the documents reveal a series of "readouts" or briefings on a series of six trade negotiation meetings between the UK and US in both London and Washington from July 2017 and July 2019.

US Worked on Total Market Access to UK Economy

The documents outline statements from the US Trade Representative director Thomas Fine. Fine admits that US officials had been working on an assumption of "total market access" to the UK economy, which Corbyn claims includes the NHS.

The Trade Director is quoted as saying:

"The assumption is that everything is included unless something is explicitly excluded... The EU simply didn’t understand that."

While Mr Fine does not explicitly mention the NHS, statements by the British government in a separate document indicate that considerations were made by the UK's chief negotiator regarding drug prices.

"The impact of some patent issues raised on NHS access to generic drugs (i.e. cheaper drugs) will be a key consideration going forward."

Mr Corbyn claimed that the government had "sanctioned" the talks and were aware of the content of the demands, but did not claim that the UK government had yet agreed to them.

​The documents also outlined that the UK government's request for climate outcomes and environmental considerations were rejected by the US.

One readout states the US was demanding a ban on any mention of climate change within the trade talks and that the USTR are bound by Congress "not to include mention of greenhouse gas emission reductions in trade agreements."

"But UK commitment to the Customs Union and Single Market would make a UK-US Free Trade Agreement a non-starter."

Talks also include the apparent intention by the US government to reorient UK foreign policy post-Brexit and enter the trade war against China.

It states that China particularly is a "priority for the Administration" and that an "element of positive agendas" by the UK and the EU would be "shared action." 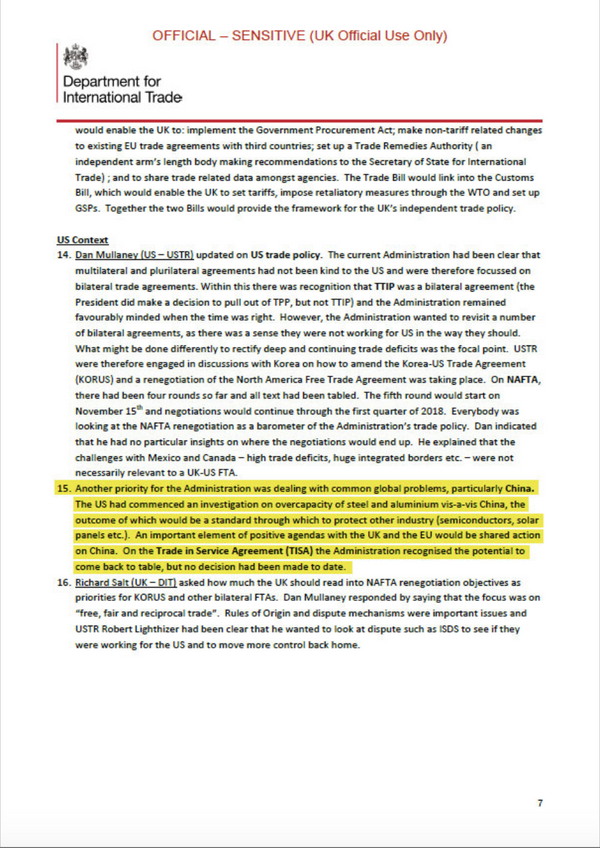 UK-EU Situation Would be Determinative

Seemingly vindicating revelations by the UK government back in June that the US was pressuring the UK to pursue a no deal Brexit, the document says:

"USTR were also clear that the UK-EU situation would be determinative: there would be all to play for in a No Deal situation."

But UK commitment to the Customs Union and Single Market would make a UK-US Free Trade Agreement a non-starter."

Where trade talks appear to have reached their furthers development towards singing the agreement relate to the UK dropping EU regulatory standards on products, reigniting fears about "chlorinated chicken" and "maggot infested tomato sauce."

The unedited readout shows that the US is "concerned" with UK's "harmonisation" with the EU Sanitary and Phyto-Sanitary (SPS) regime, which according to the EU are put in place to "protect human and animal health."

The full documents appear to have been around online for some time after being uploaded to Reddit last month. 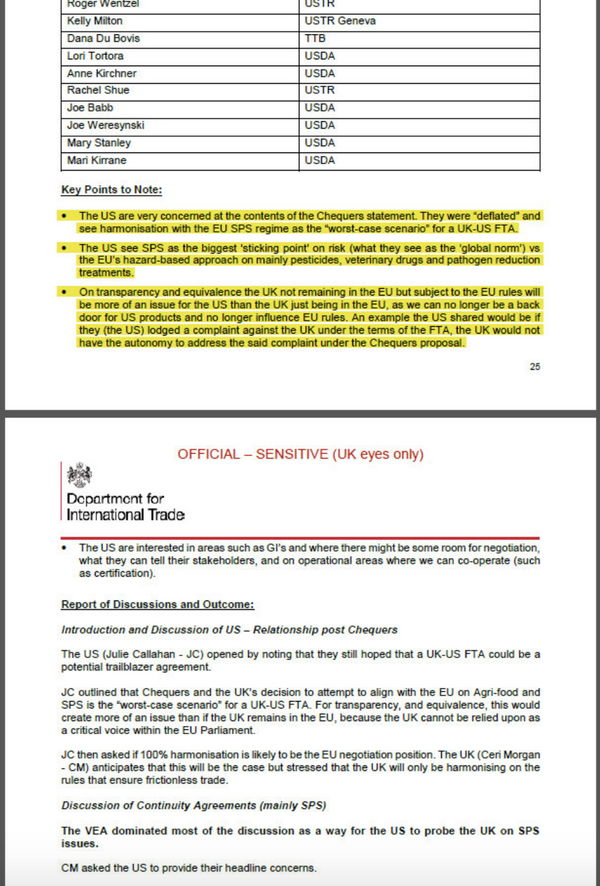 The Conservatives responded to the leaks by accusing Corbyn of trying to redirect attention away from the problem of antisemitism within the Labour Party.

Conservative Party leader and Prime Minister Boris Johnson reiterated on ITV news following the conference that there are "no circumstances" where the NHS would be on the table during negotiations.

“Jeremy Corbyn is getting desperate and is out-and-out lying to the public about what these documents contain."

"He has always believed in conspiracy theories - which is why he has failed to crack down on the scourge of antisemitism in his party."

"This is the man that has caused huge offence by blaming an imaginary ‘Zionist lobby’ for society’s ills and now he has decided to smear UK officials too."

Tories clearly rattled by this report which reveals secret meetings between Johnson's govt and US pharmaceutical corps. They continually interrupt Corbyn when he highlights it in Parliament... pic.twitter.com/nHIsLYI9UA

​Accusations by the Labour Party and it's supporters that the government was planning to sell-off UK public assets to the US have been launched against the Tories since the beginning of the trade talks, but have been repeatedly denied by both the Johnson government and the Trump administration.

It was revealed in October that the UK had been holding secret meetings with US companies and that the NHS was discussed.

However, in 2017 New Leader of the House of Commons Jacob Rees-Mogg said that that Britain's post-Brexit economic prospects would be boosted by a reduction in regulation, taxes, and increased "free trade."

Likewise, current Brexit Party and former UKIP leader Nigel Farage, who has stood down in seats across the country to avoid splitting the Conservative vote, has also expressed overt desire in the past to see the NHS increasingly run by the private sector.

In 2014, a film emerged of Farage speaking to UKIP supporters, saying that the national health system should move towards a US-style insurance-based system dominated by private corporations.