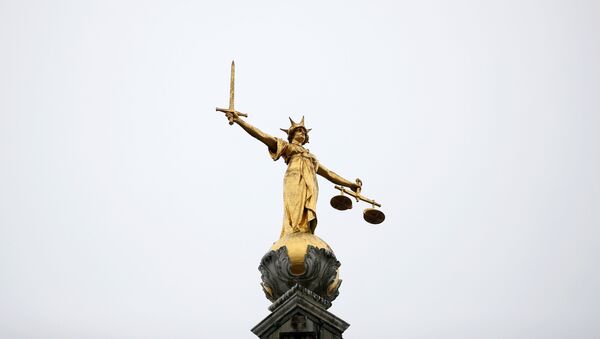 © REUTERS / Hannah McKay
Subscribe
Knife crime has become an epidemic in Britain in recent years as 23 teenagers have been stabbed to death in London this year. Jaden Moodie, who was only 14, was killed in January 2019 while dealing drugs in Leyton, east London.

A jury at the Old Bailey in London was shown CCTV footage on Wednesday, 27 November, of the moment when a stolen Mercedes was deliberately driven into a moped ridden by 14-year-old Jaden Moodie, who was then attacked by the occupants of the car.

Jaden’s relatives gasped and left in tears as the clip was shown to the courtroom where Ayoub Majdouline, 19, is on trial for murder.

CCTV footage showing the moment a 14 year old boy was mowed down while on a moped in London and then stabbed to death by rival gang members has been shown to a jury. Jaden Moodie was murdered in January earlier this year.

​Majdouline denies murder and possessing an offensive weapon on the night of 8 January 2019.

Oliver Glasgow QC, prosecuting, said Jaden Moodie was associated with a gang in Leyton called the Beaumont Crew, who were also known as Let’s Get Rich, and was dealing drugs for them on the night he died.

He said he would have felt safe as he rode the moped around Leyton because it was the gang’s home turf.

But Mr Glasgow said: “What he did not know was that this defendant, who is linked to a rival gang called the Mali Boys, had armed himself with a knife, that this defendant was in company with several others who were also armed with knives and that the group had availed themselves of a stolen car and were driving round the streets of their rivals looking for a potential target. Unfortunately for Jaden Moodie he was to become that target.”

The jury were shown the sickening moments - the whole attack took only 14 seconds - when the driver of the stolen Mercedes deliberately swerved across Bickley Road in Leyton and collided head-on with Jadon’s moped.

Mr Glasgow said: “There was nothing that Jaden Moodie could do to avoid the head-on collision and he was catapulted from the moped onto the bonnet of the Mercedes. Such was the force of the collision that Jaden Moodie’s helmet came off.”

A jury's been selected in the trial of a teenager - accused of killing a 14yo from Nottingham. 19yo Ayoud Majdouline from Wembley denies murdering Jaden Moodie in east London in January. #CapitalReports pic.twitter.com/QuGKyRMgS3

​Four men got out of the car and three of them went over to Jaden and “butchered” him with knives.

Mr Glasgow said: “Three of the males who got out of the Mercedes ran up to Jaden Moodie, who was lying defenceless and seriously injured on the ground. Rather than help him, the three males embarked upon a violent and frenzied attack, stabbing him with knives.”

The prosecution allege one of the men - who had been the front seat passenger - was Majdouline, who was wearing distinctive yellow rubber gloves.

The schoolboy bled to death in the street after being stabbed nine times.

Mr Glasgow said the gang, most of whom were wearing masks or hoodies, dumped the car nearby and made their escape on foot.

“As Jaden Moodie’s killers left the area, they threw away a knife and a pair of yellow rubber gloves in a drain beside the road,” said Mr Glasgow.

Mr Glasgow said: “No matter what may lie behind the events in Bickley Road, there is nothing that this defendant can say to excuse the murderous attack upon Jaden Moodie. His attackers chose to go out in search for him, at least three of them were armed, and all of the occupants were determined to cause as much damage as they possibly could to Jaden Moodie.”