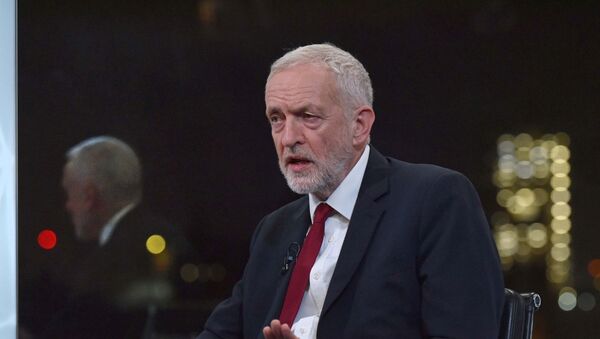 Svetlana Ekimenko
All materialsWrite to the author
Labour Party leader Jeremy Corbyn stated on Tuesday that anti-Semitism would not be tolerated under a Labour government, in response to accusations from UK Chief Rabbi Ephraim Mirvis, who slammed him for allegedly allowing the “poison” of intolerance to “take root” in party ranks.

Most front pages of UK papers on Wednesday focused on Labour Leader Jeremy Corbyn’s BBC interview, in which he resisted calls to apologise for alleged anti-Semitism in the Labour party.

Corbyn, interviewed by Andrew Neil on the long-running issue, was asked four times whether he would like to apologise, but instead rejected allegations of anti-Semitism, which has become far more rife under his leadership.

Corbyn said his government would protect "every community against the abuse they receive".

​The Guardian's headline was:

The i also opted for a variation on the theme:

Other papers were inclined to be somewhat more dramatic in choice of headlines.

The Mail puts it succinctly: “Torn apart”, while the Express poses a question:

“Has Corbyn’s horror show gifted Boris keys to No 10?”.

The Financial Times featured the Corbyn interview story on its front page, too.

Anti-Semitism will not be tolerated in any form under a Labour government, party leader Jeremy Corbyn responded on 26 November after Britain's Chief Rabbi accused him of failing to stem the "poison sanctioned from the top” pervading opposition party ranks.

"Anti-Semitism in any form is vile and wrong," Corbyn said at the launch of Labour's race and faith manifesto, where he was heckled by protesters.

"There is no place whatsoever for anti-Semitism in any shape or form or in any place whatsoever in modern Britain, and under a Labour government it will not be tolerated in any form, whatsoever. I want to make that clear, "said Corbyn.

Earlier, Chief Rabbi Ephraim Mirvis slammed Jeremy Corbyn’s “utterly inadequate” response to Jewish MPs being “hounded out” of the party, claiming he was “complicit in prejudice”.

In an article for The Times, Rabbi Mirvis said the Labour Party’s leader had left him no choice as he feared for “the moral compass of our country” if he were to become prime minister.

Mirvis queried what it would take for a leader of the Opposition to be deemed unfit for high office, as he listed the controversies allegedly linked with Corbyn’s name.

The statement by Mirvis is the first instance of a Chief Rabbi publicly taking sides in an election campaign, with just 15 days to go until the 12 December snap poll in the UK.

Jeremy Corbyn and his Labour Party have been hounded by allegations of anti-Semitism within party ranks, with the leader of the Opposition vowing during last week’s leadership debates that every claim had been investigated and he was doing everything possible to stamp it out.