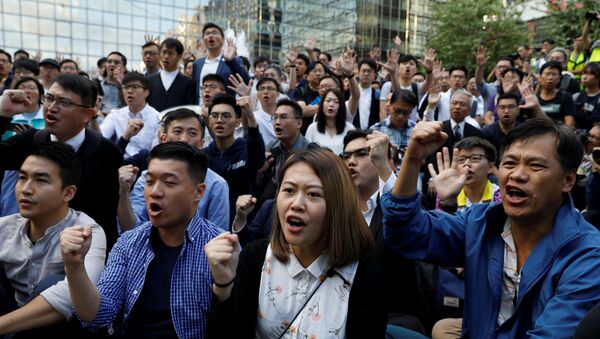 © REUTERS / Adnan Abidi
Subscribe
Amid escalated protest violence and police clashes, Hongkongers voted in record numbers and overwhelmingly supported “pro-democracy” candidates in the recent District Council election. With 17 of the 18 districts looking to be represented by those somewhat aligned with protesters, Hong Kong’s government may finally be able to open negotiations.

Immediately after the election, officials ventured to Hong Kong Polytechnic University to appeal to both the police and those still holding out within the campus, which was cordoned off on November 17, to reach an agreement defusing the situation.

People gathering around newly elected councillors on Monday. They want to go to Polytechnical University later, where still a few protestors are staying. #Hongkong pic.twitter.com/e9YOWyDdmc

While the Hong Kong Police Force will record the information of those who exit the university, Chief Superintendent Ho Yun-sing, district commander of Yau Tsim District, explained that the students would not be arrested and those who need medical or psychological assistance would receive those services.

Mike Wong, vice president of the San Francisco chapter of Veterans for Peace, joined Radio Sputnik’s By Any Means Necessary on Monday to discuss the elections and how both sides can benefit from the new leadership.

“The anti-government side won 17 out of 18 districts, however … most of the people [who] ran that were not pro-government did not run on a platform of supporting the violence. They may have supported one or more of the demands, and they may have supported change in the government, but only about 13 to 16% actually made some statements supporting the violence,” he explained to hosts Eugene Puryear and Sean Blackmon.

Wong also pointed out that while a similar election happened in 2014 following the so-called Umbrella Revolution, those same anti-government individuals who secured spots on the District Council were not reelected later, due to their inability to address the needs of their regions.

Knowing this, he said, the “newly elected officials have said that they are going to pay more attention to local issues going forward, as well as their overall theme of trying to promote democracy.”

“Now the ironic thing about it is that this election actually proves that there is democracy in Hong Kong,” Wong contended, “and it’s been there all along.”

He went on to highlight that, according to American libertarian think tank CATO Institute’s 2018 Human Freedom Index, which measures the state of human freedom regarding personal, civil and economic factors, Hong Kong was ranked third, while the US took the 17th spot.

While the anti-government demonstrations have been somewhat leaderless throughout the months-long ordeal, and government-protester negotiations have suffered as a result, Wong argued that the presence of the newly elected councilors opens up the door for a new wave of dialogue - even despite the fact that they do not take office until January.

At the same time, “Carrie Lam, the chief executive of Hong Kong, has also said that she’s willing to negotiate and compromise, so this may be a turning point,” he said. “It is possible that both sides may be able to compromise.”

000000
Popular comments
China Central government too complacency with HK since the date of Mrs Thatcher signature of returning HK to China. The USA and the UK worked silently on HK people by addressing huge amount of scholarship from HK to the USA and the UK until now. The new generation of HK Chinese did not know poverty, and all were well fed. They believe that the relatively wealth of HK is thank to the USA and UK subservience. Chinese Central government never initiate the main strategy of educate the HK Chinese youth on the loyalty to their mother land, to remember the Chinese history of being plundered by precisely those countries that nowadays are supporting the revolts to create unrest. China central government is to be blame for its naivety of thinking that because HK has Chinese blood that is enough to overcome brain washing of the young. Universities, polytechnics, and schools have designed on the American and UK curriculum. Education has been left to market forces in total disregard with those of Communist China.

landauroj
26 November 2019, 04:31 GMT2
000000
Now will come the truth... the newly elected dimwits will have to swear allegiance to Beijin landauroi comment .. excellent. When the dimwit students apply for jobs, if they are any. those with criminal records are stuffed anyway. And.. the elections were NOT a referendum with clear points, just for local councils.