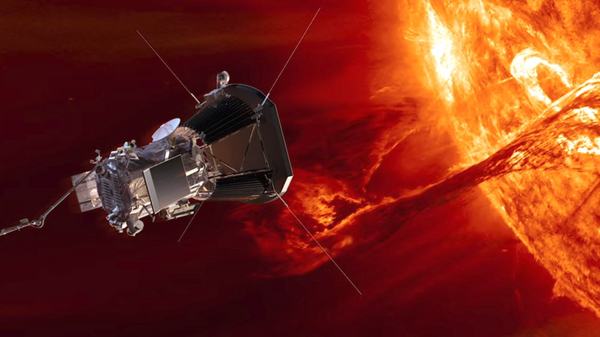 The "song" detected by scientists is apparently present even when no solar storm is striking Earth, though it appears less complex and lower in pitch during such "quiet" periods.

Researchers studying the impact solar wind has on our planet’s magnetic field have determined that waves emitted by such collisions can be converted into signals that can be perceived by the human ear. The European Space Agency explained that this study helps further our knowledge of space weather, which has become increasingly important today due to the impact solar storms can have on electronics, not to mention that this research "also has a larger role to play in our understanding of the Universe."

"Magnetic fields are ubiquitous and so the kind of complex interaction seen in Earth’s foreshock may take place in a variety of cosmic environments, including exoplanets orbiting close to their parent star, as they would be immersed in intense magnetic fields," the ESA said in a statement.

The discovery was made after a team led by former ESA research fellow Lucile Turc examined the data obtained by the Cluster mission, a group of four spacecraft which study our planet’s magnetosphere and its interaction with the solar wind.

The researchers determined that when a solar storm’s foreshock collides with Earth it releases magnetic waves “that are much more complex than first thought” and which, if converted into audible signals, “give rise to an uncanny song” resembling some kind of sound effects from science fiction movies.

"In quiet times, when no solar storm is striking the Earth, the song is lower in pitch and less complex, with one single frequency dominating the oscillation," the statement said. "When a solar storm hits, the frequency of the wave is roughly doubled, with the precise frequency of the resulting waves being dependent on the strength of the magnetic field in the storm."