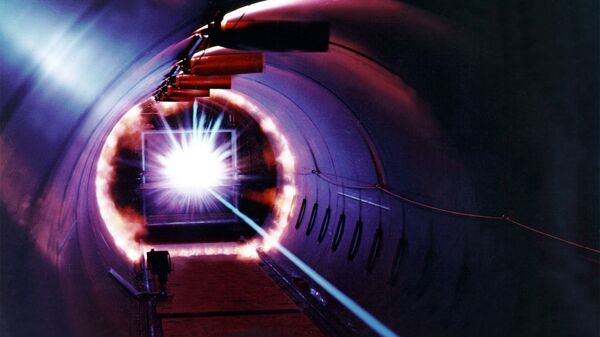 CC0 / /
Subscribe
International
India
Africa
Scientists at Samara University, together with the Russian Academy of Sciences, have developed a new method for creating optical elements, which makes it possible to improve laser data-transmitting and biomedical devices. The research results were published in Optics Express magazine.

Russian scientists have developed a new approach to constructing metasurfaces, making it possible to create optical elements for devices that can control the polarisation and electromagnetic waves phases, as well as create light fields with previously unexplored properties, including unique laser beams.

"We’ve developed an optical element based on a metasurface and demonstrated its effective operation: simultaneous formation and focusing of a special laser beam with a vortex polarisation structure. In the focus of such a beam, light energy partially propagates towards the source, which is impossible when focusing classical laser beams," Dmitry Savelyev, the author of the study, assistant professor of technical cybernetics at Samara University, said.

The scientist also noted that higher-order metasurfaces provide a large overall reverse energy flow. That is, laser beams formed with polarising elements are resistant to interference from the transmission of information in various turbulent media, for example, in the Earth's atmosphere.

"There is a way to transmit data through a laser beam in the atmosphere, but it is subject to interference. Using the developed metasurfaces, it’s possible to create special laser beams that will be more resistant to interferences in the atmosphere, such as wind, fog or rain. Thus, data can be transmitted over a greater distance with less loss," Sergey Degtyarev, a co-author of the study and research fellow at the Institute of Image Processing Systems of the Russian Academy of Sciences, said.

The scientist explained that the implemented metasurfaces allow the creation of new types of optical traps. They work like a vacuum cleaner: the reverse energy flow near the optical axis makes the particles move to the source.

In addition, according to experts, combining a polariser and a focuser in one element makes it possible to create a large reverse energy flow near the optical axis. This will help improve optical tweezers, laser cutting and engraving in biology, medicine and material processing, as well as reduce the number of optical elements in devices.

"Polarisation control allows you to create light fields with new properties. By changing the laser beam structure, you can change the nature of the impact on the object; and this is very important for laser cutting and engraving in the processing of materials," Dmitry Savelyev said.