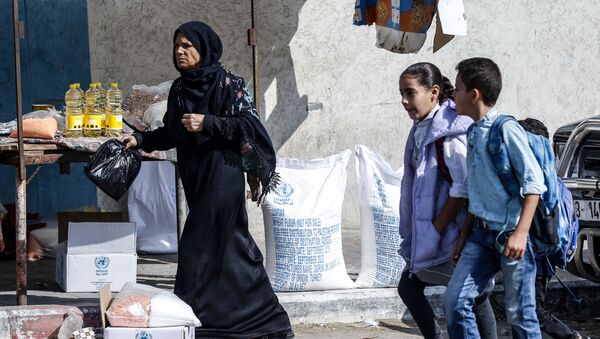 As Palestinians are set to clash with Israel's security forces in the West Bank, venting anger at the US decision to recognise the legality of the Jewish settlements in the area, a Fatah official believes the day-of-rage demonstrations are aimed at boosting the ratings of President Abbas, not making a statement against Washington's new policy.

Hundreds of Palestinians are expected to flock to checkpoints in Ramallah, Hebron and several other locations across the West Bank on Tuesday, clashing with the Israeli Defence Forces, chanting anti-Israel slogans, burning tires and hurling stones.

Clashes between Israeli security forces and the Palestinains are not uncommon. Earlier this year, violence erupted following Palestinian frustration with the condition of Palestinian inmates being held in Israeli prisons and a series of Israeli arrests throughout the West Bank.

This time around, the so-called day-of-rage demonstration comes following US Secretary of State Mike Pompeo's announcement last week reversing Washington's decades-long policy on the Jewish settlements, which saw them as violating international law.

Although the ground has been quiet since the announcement, with only several Palestinian officials making statements condemning the US for its stance, no demonstrations have taken place to protest the move.

Now, however, this seems to be changing.

The Palestinian Authority has already announced that schools will be operational till 11:30 local time only, whereas official institutions and businesses were asked to shorten their employees' working day, in an attempt to attract bigger crowds to the friction points.

IDF soldiers were advised to exercise restraint throughout the day, fearing potential clashes might lead to casualties - something that could escalate the situation, making it spiral out of control.

Too little, too late:

But Dimitri Diliani, a member of the Fatah Revolutionary Council, says that the protests - that came a little too late - will be mostly peaceful. "Internal political disputes keep the majority of Fatah activists out of the apparatus. That's why I envision these protests will be short-termed, and non violent but symbolic," he added.

The timing, believes Diliani, is not coincidental. "The people of Palestine got disappointed with the President as he appears to be too weak in taking serious political steps against Washington's actions, that first recognises Jerusalem as the capital of Israel and then recognised the legality of the Jewish settlements in the West Bank," he said.

A recent poll conducted by the Palestinian Centre for Policy and Survey Research backs his claims with more than 53 percent of those asked saying there were dissatisfied with President Mahnoud Abbas' performance throughout the years. The same poll also showed that around 55 percent of the Palestinians in the West Bank would like to see Abbas resign, with only 39 percent believing he should keep his post.

People are mainly frustrated at the slow economic growth, poverty and high unemployment rates, that continue to present a problem despite dropping from 17 percent in 2018 to 15 percent in the first quarter of 2019.

Violence as means to boost ratings

That's why, believes Diliani, Abbas is calling in on protesters to arrive en masse, hoping this will not only shift the public's attention from pressing social and economic problems but will also boost his own ratings, helping him to position himself as a leader, who fights for the Palestinian cause.

"Abbas only plays internal politics, his international role has diminished and any claim to seek the international attention could not be achieved by simply protesting. We must use our diplomacy that has to regain its strength," he summed up.