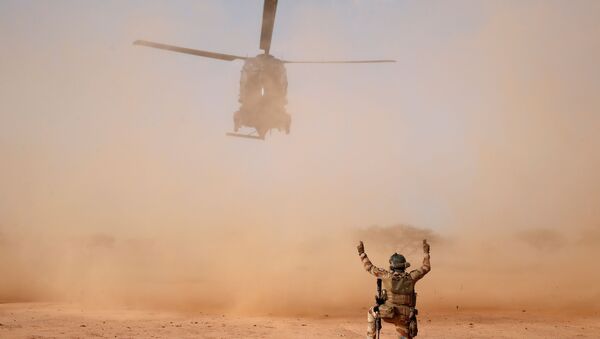 France has been conducting, along with the governments of Mali, Burkina Faso and Niger, a military operation against Islamist insurgents in the territories south of Sahara.

Two helicopters carrying French soldiers collided in midair on Monday, 25 November, during an operation against jihadists in Mali, the French president's office has said in a statement.

The Elysee Palace confirmed the death of 13 French troops in the accident between a Tigre and a Cougar helicopter, which took place in the region of Sahel, south-western Mali.

According to the statement, among the victims were six army officers, six non-commissioned officers, and one corporal. It was France's biggest single military loss in more than three decades, since 58 soldiers were killed in the bombing in Beirut in October 1983.

There has been no word on what caused the collision.

"We receive valuable support from our European allies and join forces to protect Europe from the scourge of terrorism", she told reporters on Tuesday. "We stand tall, united, resilient. It is this solidarity which strengthens us, which allows us to continue the fight," the minister added.

The fallout from the Libyan civil war fuelled a jihadist insurgence in the north of Mali in 2012, which has since spilled into central parts of the country as well as into neighbouring Burkina Faso and Niger. France intervened in its former colony in 2013, following a request by the internationally-recognised Mali government.

France has deployed nearly 4,500 troops to Sahel, the sparsely-populated region south of Sahara, to counter the insurgency, including around 2,700 soldiers in Mali. Despite almost six years of ongoing clashes with the militants, the French troops have so far been unable to fully regain control of some rebel-held regions.

The jihadists belong to a variety of terror groups linked with both al-Qaeda and Daesh*, aka the Islamic State.

Last month, French forces killed Ali Maychou, the head of Jama'at Nusrat al-Islam wal-Muslimin (JNIM), the official branch of al-Qaeda in Mali which is responsible for the majority of insurgent attacks in the country.

JNIM in response carried out an attack on Malian government forces, killing 54 people in a roadside bomb explosion at a military post in the east of the country earlier this month. Last week, 24 Malian servicemen were killed and 29 wounded during an anti-terror operation in the northeastern Gao region.

*A terror group outlawed by Russia and many other states.