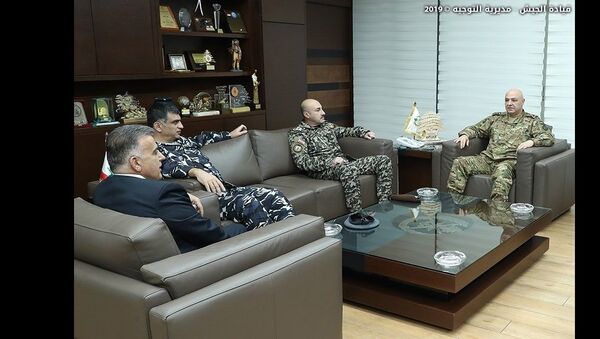 BEIRUT (Sputnik) - Commander of the Lebanese armed forces Joseph Aoun on Tuesday held a meeting with heads of the country's law enforcement agencies in Yarze.

The parties confirmed the people's right to rally on squares and roadsides as well as discussed necessary measures to ensure safety of peaceful protesters, the press service of the Lebanese Defence Ministry said.

"Those who attended the meeting warned against damaging public and private property and blocking roads, [action] that limits the freedom of movement approved by international conventions", the press service said in a statement.

The participants of the meeting to deal with the unrest responsibly and avoid any actions that could threaten the stability and safety of the people, according to the statement.

Protests in Lebanon began on 17 October after the government said it would introduce a tax on internet calls via the WhatsApp messenger. Despite the measure being scrapped and Prime Minister Saad Hariri and his cabinet being dismissed, people have remained in the streets to demand economic reforms, specifically in the banking sector.

The rallies have grown violent and are now often accompanied by clashes between protesters and police. The situation escalated to the point where the government had to order the military to refrain from using excessive force against protesters.