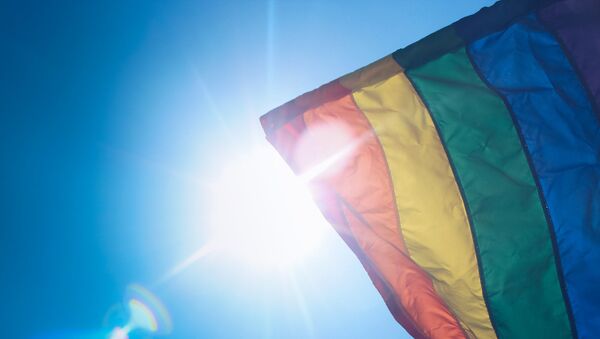 CC BY 2.0 / Quote Catalog / rainbow flag
Subscribe
Despite Ofsted declaring the lessons to be "age-appropriate", some families have claimed that classes teaching LGBT education to their children are in contradiction to their religious outlook and are not appropriate for students of ages 4 to 11.

A UK judge ruled on Tuesday that protests from parents frustrated that their children are too young to be taught about LGBT politics have been permanently banned outside the school.

High Court judge Mr Justice Mark Warby granted a request made by Birmingham City Council, who sought a court order to impose restrictions on demonstrations at the school and extend the exclusion zone around Anderton Park which forbids their right to protest.

Following a five-day hearing, Justice Warby stipulated that the restriction "does not amount to unlawful discrimination against the protesters".

Under the 2010 Equalities Act, schools must prevent any unlawful discrimination based on the characteristics of students, including their religious beliefs, and ensure that parents are aware of the content being taught to their children.

He explained that protesters had "misunderstood and misrepresented what is being taught at the school", and that the new lessons were not "promoting homosexuality" nor were they teaching sex education, as was alleged by the opposition.

Those who oppose the introduction of LGBT classes claim that they are against their religious beliefs and that their children are too young to be subject to the "sexualisation" of education.

While the classes were opposed by members of both the Christian and Muslim communities, the majority of the protesters were of the Muslim faith and have been staging regular demonstrations outside the school in recent years outside of Anderton Park Primary School in Birmingham.

Before the ban, the crowds could be seen shouting slogans and insisting that same-sex relationships stand in contradiction to their families' religious beliefs.

The protestors adamantly deny that accusations of homophobia saying that they do not discriminate against anyone.

In response to the ruling today, Paul Whiteman, the general secretary of the National Association of Head Teachers, said that the decision made it “abundantly clear” that the school entrance was no place for a protest.

Earlier in the year, Headteacher Sarah Hewitt-Clarkson spoke to Sky News, calling the protests "homophobic" and revealed that some members of staff even required professional help due to the events.

She told Birmingham's Civil Justice Centre: "I have seen many tweets and texts and video messages by the protesters that shows they are not interested in consultation."

"There are many things that I have seen and heard over the past nine months, particularly posted by some of the defendants, that are inciting hatred."

Shakeel Afsar, a leader of the protests, told the court during the case to impose the exclusion zone in October that:

“We want our children to learn about equality but this needs to be done in ways that are age appropriate and that is in consultation with parents."

“There was no prior consultation before children were sent home with Princess Boy books", he said to the court.

"Parents feel as if they (the school) are teaching children of Ibrahamic faith that homosexuality is acceptable. That is different from saying homosexuals exist."

Other primary schools in the Birmingham area have received public pressure, even to the extent of caving to the demands. Parkfield Community School removed its LGBT programme after similar demonstrations and a death threat was sent to headteacher Andrew Moffat.

In March, up to 600 children of both Christian and Muslim families were kept home from Parkfield in response to the “No Outsiders” programme being taught there to children of ages 4 to 11.

According to barnabasfund, the parents considered the lessons “not age appropriate” and that pupils were being “brainwashed”.

The classes include lessons incorporating same-sex relationships, transgender issues, and LGBT rights, with plans by the Department of Education to make them compulsory by 2020.

000000
Popular comments
Obviously, High Court judge Mr Justice Mark Warby should be struck off and heavily fined aiding and abetting the promotion of sexual perversion to impressionable young children.
Brit26
27 November 2019, 00:55 GMT4
000000
This Child Torture will end with the Fall of the Tory Pedophiles from power.