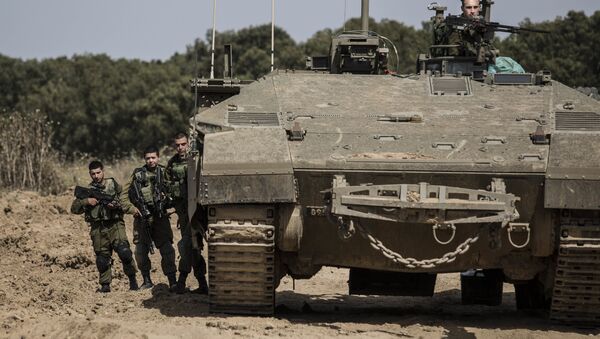 Oleg Burunov
All materialsWrite to the author
In September, US President Donald Trump confirmed that he had spoken to Israeli Prime Minister Benjamin Netanyahu about the prospects of signing a mutual defence treaty which Trump said may “anchor the tremendous alliance” between the two countries.

Israeli Ambassador to the US Ron Dermer has stated that the Jewish state’s military chief supports the idea of clinching a bilateral defence pact with the US.

Speaking to the Jewish Institute for National Security of America conference, a Washington-based think tank, on Tuesday, Dermer said that the idea have been endorsed by Israel Defence Forces (IDF) Chief of Staff Aviv Kohavi and National Security Adviser Meir Ben-Shabbat, as well as Prime Minister Benjamin Netanyahu.

“There is serious interest [in the pact] on both sides,” Dermer noted, adding that “such a treaty would provide us with an additional layer of deterrence against the most extreme threats that Israel faces.”

Responding to concerns that the treaty “could inhibit Israel’s freedom of operation,” he underscored that the Jewish state “must never, and will never agree to a defence treaty that ties our hands.”

According to him, Israel should clinch a “narrow treaty” that could be in line with defence needs of both sides.

Dermer spoke after US President Donald Trump tweeted on 14 September that he discussed “the possibility of moving forward with a Mutual Defence Treaty” during his phone call with Netanyahu earlier that day.

Trump claimed that the treaty may “anchor the tremendous alliance between our two countries.”

Netanyahu, for his part, thanked his “dear friend President Donald Trump”, adding that Israel has "never had a greater friend in the White House”. The Israeli Prime Minister expressed hope that the two countries would “continue full steam ahead with our common battle against terrorism.”

Together, we will continue full steam ahead with our common battle against terrorism.
Congratulations on your latest success against Bin Laden’s son. God bless America. God bless Israel.

Earlier in September, former Israeli defence minister and Blue and White alliance co-leader Benny Gantz slammed the idea of US-Israel mutual defence pact, claiming that it would be “a serious mistake,” which had the potential to damage Israel's security.

Despite the absence of a formal mutual defence pact, the two countries regularly carry out joint exercises, and the US maintains a missile early warning radar station near Dimona, an Israeli city in the Negev desert where the country’s nuclear research facility is based.

The US has repeatedly provided Israel with assistance during wartime, most notably during the Arab-Israeli War in 1973 and in the course of the 34-day armed conflict between Israel and Hezbollah in 2006.

Trump, for his part, on many occasions pledged to provide Israel with all the necessary diplomatic, legal and military support in any possible confrontation between the Jewish state and Iran, which doesn’t recognise Israel’s right to exist and threatens to wipe it off the map.