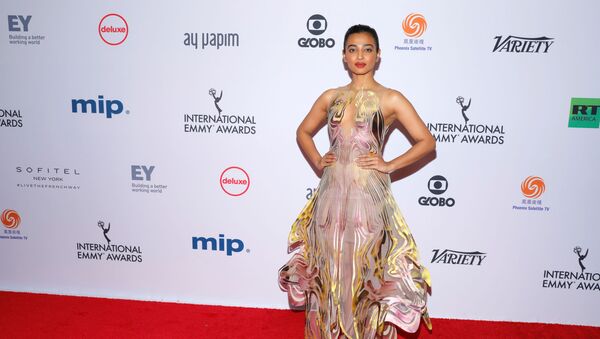 New Delhi (Sputnik): Netflix India's “Lust Stories” and “Sacred Games” were nominated in the Best TV Movie/Mini-Series and Best Drama Series categories, respectively, at The International Emmy Awards. Bollywood actress Radhika Apte was also nominated for the Best Performance by an Actress category. However, none managed to take home an Emmy.

Filmmaker Karan Johar along with the star cast of “Lust Stories” including directors Anurag Kashyap, Zoya Akhtar and Bollywood stars Radhika Apte and Nawazzudin Sidiquie looked bright and sparkling as they posed together on the red carpet, surrounded by photographers.

The same was the case with the “Sacred Games” crew, the first season of which was headlined by Nawazuddin and Bollywood star Saif Ali Khan.

Wearing a suit designed by acclaimed designer Dolce and Gabbana, Karan posted a photo with the producers of “Game of Thrones”.

Honoured to have met the #GOT #GameofThrones prolific producers! David Benoif and D. B Weiss At the @iemmys pic.twitter.com/2XnIMEppvL

Nawazuddin announced on Twitter that his international series “McMafia” won Best Drama Series award at the gala night. The actor tweeted a photo featuring himself and director James Watkins.

Bollywood fans were flabberghasted with number of Indian faces representing the country at the Emmy Awards this season.