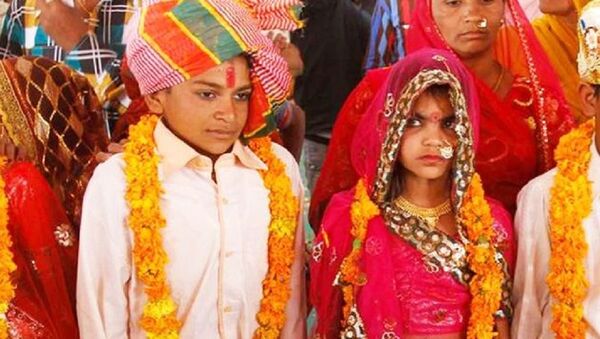 CC BY-SA 4.0 / Damgararavishankar / A wrong wedding tradition is going on currently India's various states
Subscribe
New Delhi (Sputnik): The Supreme Court ruled in 2017 that under no circumstances can a child under 18 consent to sexual intercourse.

The government of India is mulling amendments to the Prevention of Child Marriage Act to make reporting of child marriage mandatory, India’s Women and Child Development Minister Smriti Irani said on Tuesday.

Reports point out that in the interior of the country, child marriages remain unreported, especially in tribal belts and rural areas.

Irani said the number of pregnancies in married girls under the age of 18 is as high as 12 percent.

“Children born out of child marriages are prone to undernourishment,” she added.

There are concerns raised over higher rates of nutritional and obstetric problems associated with adolescent pregnancy. Child-marriages often result in higher morbidity and mortality among mothers and new-born babies, said media reports.

"It is part of our main focus in our engagements with the chief ministers. One of the problems is that unlike POCSO (Protection of Children from Sexual Offences Act), in which reporting a case is mandatory, there is no mandatory reporting of child marriage," the Bharatiya Janata Party legislator said.

She added: "We are looking at these kinds of interventions in the Act itself and discussing the possibility of amending it. We want something similar in the Child Marriage Act," Irani said.

According to the Prohibition of Child Marriage Act (PCMA), 2006,  any girl married under 18 years any boy married before 21 years, is considered a “child marriage".

The government in October indicated that the minimum age of marriage for men in India might be reduced to 18 years through an amendment to the PCM Act.

The number of girls and boys getting married before their respective legal ages remains large with 12.1 million child marriages, according to the most recent census data.