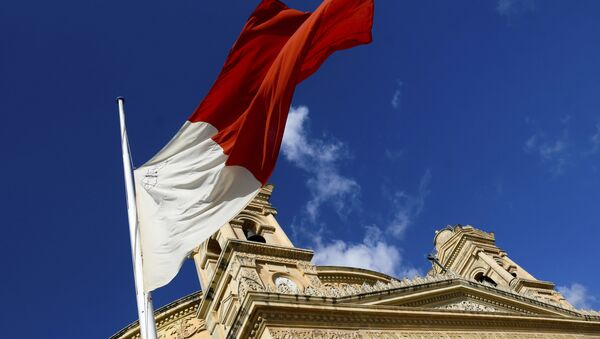 © AP Photo / Jonathan Borg
Subscribe
The pardon is wide-ranging, and extends to "other crimes Theuma could have allegedly been involved in" – although it can be withdrawn “if he fails to observe the conditions imposed”.

Melvin Theuma, the man who claims to know the mastermind behind the murder of Maltese journalist Daphne Caruana Galizia via car bomb in October 2017, has been granted a Presidential pardon.

The Maltese government said Theuma — described as a "middleman" in local media — was pardoned "so he can testify on the facts”.

Theuma was arrested on money laundering charges, and under interrogation said he could link the person suspected of commissioning the murder of Caruana Galizia to those who carried out the killing, as well as those who helped provide the explosive device used.

​Mere hours after the pardon was offered, police arrested Yorgen Fenech, a prominent Maltese businessman, aboard his luxury yacht, and Maltese Prime Minister Joseph Muscat’s Chief of Staff Keith Schembri resigned. He is expected to be questioned by the police as they widen their investigations into Galizia’s murder.

Three men — brothers Alfred and George Degiorgio and Vince Muscat — have been charged with the murder. They have all pleaded not guilty.

Maltese media report Theuma cut his criminal teeth engaging in low-level financial crime related to the Marsa horse-racing track, before becoming a mid-level financier of criminal enterprises, using funds largely amassed through loan sharking. He also developed a thriving 'parallel' - and illegal - lottery, pegged to the national one. Around €2 million in cash was found in his home after his arrest.

​Theuma is believed to have links to an organised crime group in Marsa involved in the smuggling of narcotics and contraband, and also moonlight as a taxi driver at Fenech’s Portomaso complex. He at one time acted as the businessman’s personal go-for.