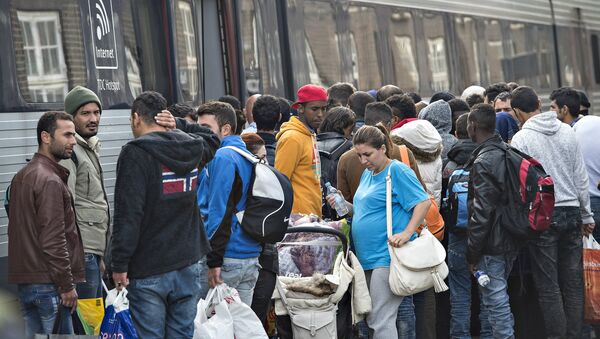 In his passionate speech, Sweden Democrats leader Jimmie Åkesson called for a radical policy shift in order to save Sweden from mass immigration, which he claims has “broken” the nation.

To be able to “rebuild” Sweden, a return policy must be in place, Jimmie Åkesson, the leader of Sweden's largest right-wing party, proclaimed at his party's national convention.

“In order to repair any damage that has already been done, it is imperative that asylum and family immigration come down to an absolute minimum. Simply put: There must be more who emigrate than immigrate. We must send out the signal that Sweden is full and will be so for the foreseeable future. This is a basic premise. If we fail to do this, the problems will only continue to grow, and the consequences will be even worse,” Jimmie Åkesson explained.

Additionally, he voiced tougher demands for integration, including requirements for livelihood and adaptation. "People who come here must understand that they have come to a new country and cannot continue living as in their home country," Åkesson explained. According to the party leader, there is no room for compromise on this.

This speech was strongly intertwined with Åkesson's searing opinion piece, called “Mass immigration has broken the nation”, which was published this weekend by the daily newspaper Aftonbladet.

“Municipalities on their knees. Shootings and blasts every other day. An escalating insecurity that is gradually breaking down our country. Does Sweden have problems? Indeed,” Åkesson wrote in the very first paragraph.

​Åkesson stressed that the society is a shell of its former self, with the social contract torn down and the values that guided the previous generations reduced to words without meaning.

However, in his speech Åkesson made sure that there is hope left for Sweden. Åkesson also spent some time revelling in the success of the Sweden Democrats, which emerged as a nationalist fringe party in the late 1980s to become the most popular party in the country for the first time in history, according to opinion polls.

“Let's enjoy this for a while. Appreciate the feeling. Sweden's largest party,” the triumphant Sweden Democrats leader said.

Swedish Party Leader Apologises to Immigration Critics for 'Blame and Ostracism'
When the Sweden Democrats, who've been consistently shunned by fellow Swedish parties despite gradually optimising their electoral performance, rise to real power, Sweden will change, he assured.

He accused his nemesis Stefan Löfven, leader of the left-of-centre Social Democrats, of driving “meaningless projects” that wasted billions of kronor.

“Sorry, Stefan Löfven, but your idea that Sweden should serve as an ATM to all the countries of the world will be rejected,” Åkesson concluded, suggesting that the fact that an Iraqi defence minister manages to get a sick leave in Sweden, unlike one with terminal cancer, tells a lot about the country that strives to appear as a “humanitarian superpower”.

A recent opinion poll put the Sweden Democrats as Sweden's most popular party for the first time, edging out Löfven's Social Democrats, who slid to just 22.2 percent. In the 2018 election, the Social Democrats had their worst electoral performance in a century at barely 28 percent of the vote, after commanding over half of the vote as far back as the 1960s.