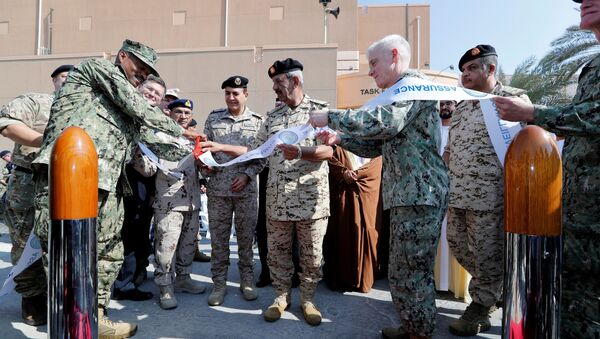 The US has been pushing for creation of a naval coalition to safeguard the Strait of Hormuz, calling on its allies to join in following a series of attacks on vessels in the region earlier this year that were blamed by Washington on Iran.

Qatar and Kuwait have signalled their intention to join the US-led naval coalition in the Persian Gulf, US Army Colonel John Conklin, chief of staff of the coalition, revealed on Monday.

"Qatar and Kuwait have already told us they are going to join, so it is just a matter of time," he said.

The United States and the European Union have been calling for the deployment of naval vessels to the Persian Gulf in the wake of a string of attacks on oil tankers earlier this year.

Washington has pinned blame on Iran for the incidents, but Tehran has vehemently denied the allegation.

However, despite the US calls, few countries have agreed to join the naval coalition known as the International Maritime Security Construct (IMSC).

The US-led force based out of Bahrain currently comprises the United Kingdom, Australia, Albania, Saudi Arabia and the United Arab Emirates as well as Bahrain itself and the United States.

Such US allies like Germany and Japan refused to join the coalition, with Berlin opting for diplomacy when dealing with Tehran and Tokyo preferring to preserve close economic ties with the Middle Eastern nation.

France, meanwhile, is pushing for a European maritime coalition that will be a force unrelated to the one led by Washington. It is expected to come into force early next year, comprising 10 nations both from Europe and outside of it.

Iran has been critical of American mission in the Gulf waters saying that the mission could jeopardise security in the international waterway.