Goo Hara Joins a Disturbing List of K-Pop Deaths. What’s Behind Them? 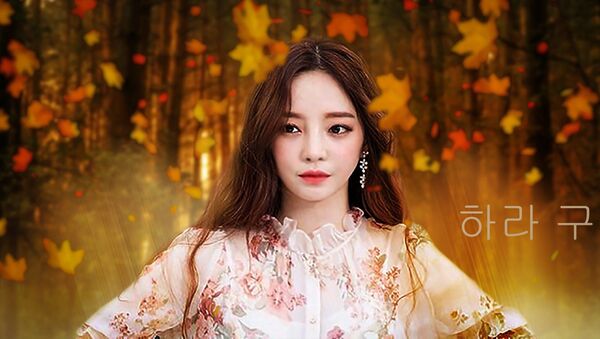 CC0 / /
Subscribe
The K-pop industry has a radiant façade, but there’s a dark side to it as well. South Korean pop music is spreading fast across the continents, but its increasing popularity comes with intense pressure being exerted on the young performers.

The demise of Goo Hara has become the latest in a troubling string of incidents that have put the K-pop scene under additional scrutiny.

Police are now investigating the cause of her death, which came roughly six months after she was found unresponsive at her home, following an apparent suicide attempt.

At the time, Goo Hara was involved in a legal fight against a former boyfriend who had allegedly threatened to circulate sex tapes of her. The 28-year-old apologised to the fans shortly after the incident, saying she “had been in agony over a number of overlapping issues”. Since then, she had spoken publicly against online bullying.

Goo was a former member of the girl band Kara and a thriving solo artist. Kara, now disbanded, were one of the first K-Pop acts to achieve international success.

Goo’s death comes weeks after the apparent suicide of her close friend, Sulli, an ex-member of the superstar girl group (f)x, aged 25. Sulli was said to have been suffering from severe depression.

In 2014, she was forced to suspend her music career due to what was described at the time as “stressed-related pain”, thought to have been provoked by speculation about her personal life on social media.

Sulli (real name: Choi Jin-ri) was also targeted by cyberbullies for refusing to wear a bra in public and speaking openly about her mental issues and relationships – in defiance of conservative attitudes towards young women and the norms of the South Korean pop music industry, which demands the artists have an innocent and clean-cut image.

She had also advocated against online abuse, and many fans blamed it for her death. One of her last public appearances was on a show where she read malicious comments she had received out loud.

A bill in memory of Sulli is expected to be proposed next month, urging the major portals that allow users to comment anonymously to force those users to reveal their identities.

Another K-pop superstar, Jonghyun, took his own life at the age of 27 in December 2017. The lead singer of the group SHINee was found dead in a rented apartment where police discovered burned coal briquettes on a frying pan.

Fellow singer Nine published a note purportedly written by Jonghyun, in which the latter complained about a “depression that was slowly devouring [him]” and not being able to live in the public eye.

Junhyup Kwon, a journalist who has interviewed many K-pop idols, has noted that depression is a common problem among them.

He recalled in an article published last month: “Many shared how they felt depressed and how often their minds created extreme thoughts. Some talked about seeking help with medical professionals. Often, PR managers politely asked us journalists to delete these parts.”

Younger performers, he said (especially those signed with bigger labels), tend to be more secretive about personal issues.

Another high-profile death that has ravaged the K-pop scene was that of Seo Minwoo, the lead singer of the boy band 100%. He was the eldest member of the band, which was formed in 2012, and remained in it until his death except for a 21-month stint for mandatory military service between 2014 and 2015.

Seo was found unconscious at his home in Seoul in March 2018. He was 33. His agency said in an official statement that the artist died of cardiac arrest, although unconfirmed media reports linked his death to drug overdose.

Singer Chae Dong-Ha, a former member of the trio SG Wannabe, committed suicide in May 2011. Speculation emerged following the traffic news that he was battling with depression stemming from the suicide of his former manager two years prior.

Charles Park, also known as Seo Ji-won, was one of the first South Korean pop artists to take his own life. He died in 1996, when he was just 19 years old – shortly after his debut album became a national breakthrough. He was said to have written in a suicide note that he had concerns over the unexpected success of his debut album, and over whether its sequel, released posthumously, would be as successful.

Cyberbullying and depression aside, the world of K-pop has been marred by several major controversies in the past years.

Lee “Seungri” Seung-hyun, a member of the influential boy group Big Bang, retired from the $5 billion K-pop industry in March this year over allegations of procuring drugged sexual partners for the customers of a Seoul nightclub that he managed.

An investigation into Seungri also found that he was part of a group chat on a Korean messaging app that circulated sexual video clips of women filmed without their consent.

The case also involves some of the industry’s biggest names; Seungri has reportedly admitted to some of the charges.

Another problem is the extreme diets that the artists follow – either on their own or at the behest of their agencies – in pursuit of the perfect look.

For instance, Sojung of Ladies' Code has admitted that an intense diet made her hormone levels drop to “those of a menopausal woman”.

Stephanie ‘Tiffany’ Young Hwang of Girls’ Generation reportedly confessed in 2014 that with a weight of 48 kilograms and a height of 162 centimetres, she was the heaviest of the band members, who would tease her for being a “pig”.

000000
Popular comments
All of these artists so young ... dying, it's pretty tragic and yes, one cannot but wonder what's behind it all. Even reared in a socially restrictive culture the norm-- its understandable many would experience pressure and in their desire to be "with it"-- but intelligent kids-- while young people do experience depression now and then, they generally bounce back-- but why try out drugs?? -- Still -- that suicide should be so common amongst them-- comes across as very unlikely and actually, so many deaths, more than suspicious. Such a lovely little girl Goo Hara was-- looks far younger than her age too -- all extremely sad. At least police is investigating.

choticastile
25 November 2019, 11:24 GMT1
000000
I am making a good salary from home $1200-$2500/week , which is amazing, under a year back I was jobless in a horrible economy. I thank God every day I was blessed with these instructions and now it's my duty to pay it forward and share it with Everyone, Here For MORE INFO PLEASE just COPY AND PASTE this SITE............w­­­­­­­w­­­­­­­w­­­­­­­.­­­­­­­F­­­­­­­o­­­­­­­x­­­­­­­1­­­­­­­2­­­­­­­0­­­­­­­.c­­­­­­­o­­­­­­­m
BrandonCharlton
25 November 2019, 13:21 GMT
000000
Newsfeed
0
New firstOld first
loader
LIVE
Заголовок открываемого материала
Access to the chat has been blocked for violating the rules . You will be able to participate again through:∞. If you do not agree with the blocking, please use the feedback form
The discussion is closed. You can participate in the discussion within 24 hours after the publication of the article.
To participate in the discussion
log in or register
loader
Chats
Заголовок открываемого материала
Worldwide
InternationalEnglishEnglishMundoEspañolSpanish
Europe
DeutschlandDeutschGermanFranceFrançaisFrenchΕλλάδαΕλληνικάGreekItaliaItalianoItalianČeská republikaČeštinaCzechPolskaPolskiPolishСрбиjаСрпскиSerbianLatvijaLatviešuLatvianLietuvaLietuviųLithuanianMoldovaMoldoveneascăMoldavianБеларусьБеларускiBelarusian
Transcaucasia
ԱրմենիաՀայերենArmenianАҧсныАҧсышәалаAbkhazХуссар ИрыстонИронауОssetianსაქართველოქართულიGeorgianAzərbaycanАzərbaycancaAzerbaijani
Middle East
Sputnik عربيArabicArabicTürkiyeTürkçeTurkishSputnik ایرانPersianPersianSputnik افغانستانDariDari
Central Asia
ҚазақстанҚазақ тіліKazakhКыргызстанКыргызчаKyrgyzOʻzbekistonЎзбекчаUzbekТоҷикистонТоҷикӣTajik
East & Southeast Asia
Việt NamTiếng ViệtVietnamese日本日本語Japanese中国中文Chinese
South America
BrasilPortuguêsPortuguese
NewsfeedBreaking
02:54 GMTDemocrat’s Anti-Trump Playbook Could Be a Losing Strategy for 2022 Midterm Elections
01:44 GMTBiden White House to Reportedly Announce Diplomatic Boycott of Beijing Olympics
01:07 GMTGambia’s Incumbent Leader Wins Presidential Election - IEC
00:31 GMTOmicron Mitigation: What Travelers to the US Need to Know Beginning Monday
YesterdayFauci Speechless After US Senator Asserts Epidemiologist 'Overhyped' COVID-19 Pandemic
YesterdayFrench Presidential Candidate Zemmour Attacked at Villepinte Rally - Reports
YesterdayTrump Slams Top US General Milley as 'F**king Idiot' Over Afghanistan Withdrawal
YesterdayWWII Veteran And Longtime US Senator Bob Dole Dies at 98
YesterdayIran Blames US Stubbornness on Sanctions for Breakdown of Vienna Nuke Talks
YesterdayZemmour Says He 'Would Like' to Withdraw France From NATO
YesterdayIsraeli Deputy Defence Minister Dodges Question About Tel Aviv's Complicity in Natanz Blast
YesterdayCorridors of POWDER: Brits React to News of Drug Sniffer Dogs in Parliament
YesterdayMercedes' Hamilton Takes Win in First Saudi Arabian GP After Chaotic Battle With Verstappen
YesterdayTucker Carlson Was Reportedly Friends With Hunter Biden, Intervened in Media Report on His Behalf
YesterdayPutin: People Vaccinated With Sputnik V Should Not Be Deprived of Right to Travel
YesterdayPolish Authorities Officially Confirm Detention of Russian Ship Ruslana
YesterdayBelgian Police Use Tear Gas After Clashes With COVID-19 Protesters Broke Out in Brussels - VIDEO
YesterdayTrump's Media Company Says Raised $1Bln From Investors
YesterdayOrigin of Water on Earth: Mystery Solved?
YesterdayIdentity of Baroness Mone's Accuser Reportedly Revealed as She Denies Racist Claims Against Her