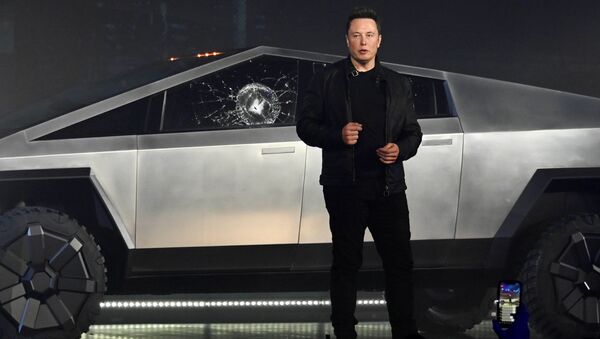 On Thursday, Tesla CEO Elon Musk introduced the long-awaited Tesla Cybertruck at a special demonstration event in Los Angeles. Although production of the strikingly angular electric pickup trick will start in 2021 or late 2022, Musk claimed that preorders are now being taken and have reached over 200,000.

Tesla's Co-founder and CEO Elon Musk on Sunday tweeted a video that had been presented at Thursday’ night event that features his company’s new Cybertruck winning a tug-of-war with a Ford F-150 pickup truck in what Musk claimed was an uphill battle.

Tesla’s tri-motor version of its Cybertruck was tied to the best-selling Ford vehicle end-to-end, and took off immediately due to the instant acceleration offered by electric vehicles. The F-150 did not appear able to compete with the new all-electric metal beast.

Musk claimed on Saturday that preorders for the Tesla Cybertruck had reached 146,000, just two days after the vehicle's introduction. On Sunday Musk updated the statistics, saying that there'd been 200,000 preorders by the third day.

Best of all, the CyberTruck doesn’t pollute. No camping trips with disgusting CO2 filling up the campgrounds or tacky generators running all night while people try to sleep in their tents — having to listen to less-than-considerate neighbors.