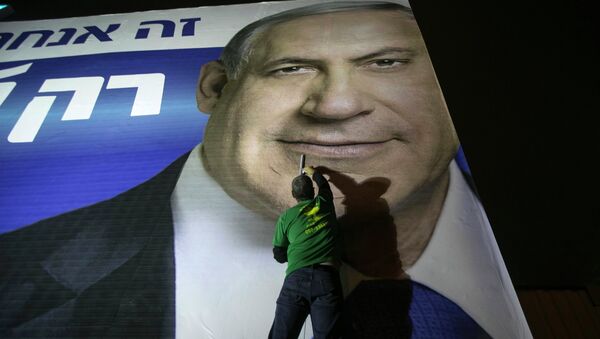 The announcement by Israel's Attorney General Avichai Mandelblitt has torn the country into two blocks: those who support Prime Minister Netanyahu and those who don't. Three days after the indictment was announced, social media is still raging – with some vowing to take to the streets to protest against the injustice done to the prime minister.

Israel's Attorney General Avichai Mandelblitt announced his decision to indict Prime Minister Benjamin Netanyahu for fraud, breach of trust and – in one case – even for bribery. This has prompted a barrage of comments from Israeli politicians, especially those on the left, calling on the prime minister to step down and give up on his four ministerial positions, which include the Ministry of Health, Social Welfare, Agriculture, and the Jewish diaspora.

But apart from the pressure mounting in the political arena, tensions are brewing on Twitter, with both Netanyahu supporters and opponents still raging over Mandelblitt's decision.

While Netanyahu has posted a video thanking a crowd for the support they gave him, many responded to his post with anger.

​Limor Moyal tweeted: "You call that support? A bunch of bored supporters in a cordoned-off area. He probably met them at a parking lot".

Another Twitter user, Gal Levy, wrote: "He is saying goodbye to other members of his sect before going to prison".

Others, however, moved to defend the prime minister, calling for protests to support Netanyahu while also bashing Israel's judicial system.

"The junta that pretends to act in the name of law keeps the real culprits out of jail", wrote Raphael Ohayon, referring to the Israeli police, the judiciary system and the AG himself. "They put Bibi [nickname for Netanyahu] in the spotlight only because the Jewish people support him. We will not forget the injustice done to him..." he added.

Another Netanyahu supporter, Ran Karmi Bouzaglo, called on people to take to the streets to protect Israel's democracy.

​Rallies in support of and against the prime minister kicked off on Thursday following Mandelblitt's announcement and are showing no signs of dying down.

On Monday, hundreds are expected to start marching from Lattrun – located some 25 kilometres away from Jerusalem – to the country's capital, holding Israeli flags and demanding justice for Netanyahu.

Another rally in support of the PM is planned for Tuesday, with thousands vowing to arrive and express their support for the prime minister.

"It will be the first time for me to attend such an event. Never in a million years did I think that I will need to do so. But enough is enough. The injustice and the coup the [left] staged to topple the current government is revolting. I have never been a big supporter of Bibi and haven't even voted for Likud but I can't sit idly by. People, take to the streets against the injustice", Avigail Tarab tweeted.

​But not everyone is optimistic about the power of protests.

"That's it, the transition was done. We are moving from a de-facto dictatorship of clerks to their de-juro dictatorship. If you think they will be ready to give up on their rule because of dozens of protesters, you are wrong. Protests won't help. We need to upscale our objection. Demonstrations are just the beginning", tweeted a user with the handle Amos.

But others were supportive, vowing to stand by Netanyahu despite the hardships.

Osnat Zohar posted: "We love you. We will all come to support you on Tuesday and we promise you that we won't let you down".

Ido Dankner wrote: "We - the people - are the boss here. Not Mandelblitt and not [the country's State Attorney] Shai Nitzan. We are the ones who will decide who the country's prime minister will be. Give me the date of our next elections!" he tweeted, referring to a potential third general vote that might take place in March 2020 if no candidate manages to form a coalition by then.

As both Netanyahu and his rival Benny Gantz have failed to form a government, the ball is now in the hands of the Israeli parliament, the Knesset, which has some three weeks to put forward a candidate – one of its parliamentarians – that will be tasked with forming a coalition.

As Netanyahu remains an Israeli member of parliament, he can attempt to file the 61 signatures needed to form a government, but doubts are running high as to whether he will be able to do so amid his legal battles.

According to the poll released by Israel's Channel 13 shortly after Mandelblitt announced his decision, 56 percent of those asked said that Netanyahu should resign from his position as the country's prime minister, with only 35 percent of the respondents saying he could keep his position.

Another poll, conducted by one of Israel's leading newspapers, Israel Hayom – considered to be supportive of Netanyahu, reached an opposite result, saying that 44 percent of those asked viewed Netanyahu as the candidate most suitable for the job, with Blue and White chief Benny Gantz coming in second, with 37 percent.