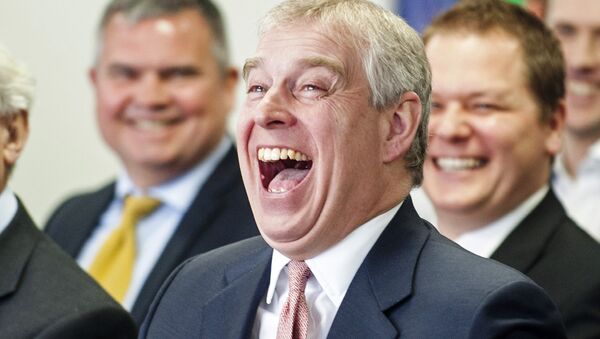 © AFP 2021 / David Parker
Subscribe
Prince Andrew, who has now ended up in the public’s and US prosecutors’ crosshairs, is alleged to have frequented paedophile Jeffrey Epstein’s house. An accuser has come forward in the case, alleging he had sex with her while she was underage, something that the Duke of York has “categorically” denied.

A former lap dancer has made jaw-dropping claims that further add to Prince Andrew’s struggles, saying he once “blew a raspberry” on her breasts at one of convicted paedophile Jeffrey Epstein’s infamous parties in his £77-million New York mansion.

Speaking to the Sunday Mirror, the woman, who hasn’t given her name, said she was paid by Epstein to hire girls that would meet Andrew’s, as well as other guests’ preferences and be curvy, “like his ex-wife Fergie".

“The Duke seemed in good spirits and was out to enjoy himself. I always thought, Andrew liked my breasts. When he started to say hello he looked at them first rather than me", the woman recalled expanding on the raspberry episode:

"He leant forward and put his face on them and blew a raspberry. I was shocked, but I laughed, thinking ‘Wow what was that?’"

She then shared how Andrew struggled to remember the right word for the gesture:

"After Andrew motorboated me he tried to remember what it was meant to be called. He didn’t quite know the term ‘motorboat’. He said, ‘motor… something?'" the ex-lapdancer recounted, going on to depict Epstein’s royal guest:

“He was trying to come off cool, but he didn’t know the words. I found him quite awkward, quite clumsy. He said I should be in a magazine for big-breasted women. It was a normal thing to happen at those parties", the woman, now 47, said.

It is meanwhile unclear if Andrew was aware of any underage girls present at the parties in the late 1990s.

“Epstein made it clear he wanted to make Andrew happy. I was told to make sure he was looked after, that he had a drink, that he was OK", the woman said detailing the way the two of them met at Epstein’s:

“I saw Andrew at parties a couple of times a year, if not more. I would flirt with him and he would hit on me and was handsy. He would stand in close proximity, looking at my breasts".

“He would hold my hands, put his arm around my waist, stroke my cheek. He used royalty, his celebrity, to his advantage", the woman continued, revealing she recruited teenagers for the parties – “younger sisters of other strippers, homeless kids, and runaways".

The woman admitted that what she did was wrong. She has previously given evidence against Epstein under the name “Tiffany Doe” and said she is sharing her story to warn other young women not to fall under the influence of “rich, powerful men”.

Prince Andrew, 57, has now found himself in the epicentre of the Epstein-related scandal, since it came to light that he rubbed shoulders with the billionaire financier and convicted paedophile.

Andrew, who, as Virginia Roberts claims, had sex three times with her, once when she was just 17, may soon be required to make a statement in a British court. The prince “categorically” denied Roberts’ claims in a Newsnight interview, also saying he cannot recall a joint picture with the then teenager. He has meanwhile ditched his royal duties and is reportedly relocating his charity office from Buckingham Palace.

Jeffrey Epstein, who was convicted of procuring an underage girl for prostitution and served a light prison sentence of 13 months, faced new sex-trafficking charges this past summer, but in August, he was pronounced dead under suspicious circumstances in his New York cell while awaiting trial.