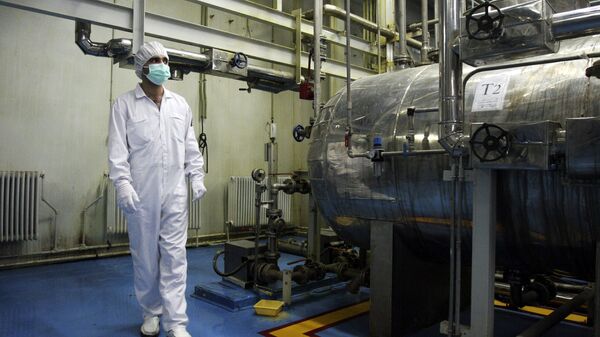 The continuous attempts by the US to pressure Iran into following its guidelines through the imposition of sanctions are doomed to failure, say Iranian scholars Sajjad Abedi and Hassan Beheshtipour, following the revocation of Fordow plant waivers by Washington.

On 18 November, the US announced that it would cancel a sanctions waiver for Iran's Fordow plant on 15 December amid Tehran's gradual reduction of its atomic commitments following Europe's apparent failure to uphold their commitments to the Joint Comprehensive Plan of Action (JCPOA). Earlier, Iran further reduced its nuclear commitments by injecting uranium gas into centrifuges at its underground Fordow nuclear site.

US Adheres to Int'l Agreements Only When It Meets Its Interests

According to Sajjad Abedi, a graduate of the Department of Nuclear Physics at the Massachusetts Institute of Technology (MIT), and research fellow at the Iranian National Centre for Defence and Security, the latest US package of sanctions will not significantly affect the fate of the JCPOA.

"The imposition of sanctions against Iran, which, as the United States suggests, will not allow the Islamic Republic to further develop its nuclear policy, is nothing but wishful thinking", Abedi suggests.

He draws attention to the fact that it's the US, not Iran, who tore apart the Iran nuclear agreement and distanced itself from the participants of the deal. In response, Tehran "decided to take effective 'steps' within the framework of the deal to encourage the US to return to the nuclear agreement", Abedi says, insisting that the implementation of these steps indicates consistence in Iran’s nuclear policy.

The Iranian researcher points out that the Islamic Republic of Iran has carried out its obligations under the deal for three years, which cannot be said of Europe and the United States.

Following Tehran's decision to further downgrade its nuclear commitments, the European Union, France, the UK, and Germany issued a joint statement denouncing Iran's move. The European signatories to the JCPOA argued that for their part they had observed the deal's provisions. Iranian Foreign Minister Mohammad Javad Zarif denied the allegations on 11 November asking his counterparts to show just one commitment that they had upheld in the last 18 months.

​Hassan Beheshtipour, an expert specialising in nuclear issues and Iranian-American relations, a political analyst on Press TV, echoes Abedi, stressing that Washington's pressure will only strengthen Iran's determination to pursue its current policy.

"While conducting its foreign policy the US is solely being guided by its own interests", Beheshtipour says. "They voted for Resolution 2231 (on the JCPOA), but did not implement it, and though they concluded the nuclear deal it was they who unilaterally withdrew from it".

According to the scholar, if Washington is dissatisfied with Iran's recent steps it should return to the JCPOA first.

The expert bemoans the fact that Europe is avoiding crossing Wasington's path because of America's economic superiority and warns that "the damage inflicted to the nuclear deal will backfire on all the country-participants", including the US.

Two months ago Tehran made it clear to the European signatories to the nuclear accord that it would pursue a fourth stage of nuclear obligation reductions unless the powers step in to protect Iran’s interests.

The Islamic Republic began rolling back nuclear obligations on 8 May 2019 signalling that it would abolish JCPOA restrictions step-by-step every 60 days unless the EU take measures to counter the US sanctions imposed on the country's oil sector, bank operations, top level officials, and the Islamic Revolutionary Guard Corps (IRGC).